The Bowhead is a great addition to the Eve lineup. I finally got the chance to play around with the ship on the test server today. I’m excited to see these around space and on killboards. 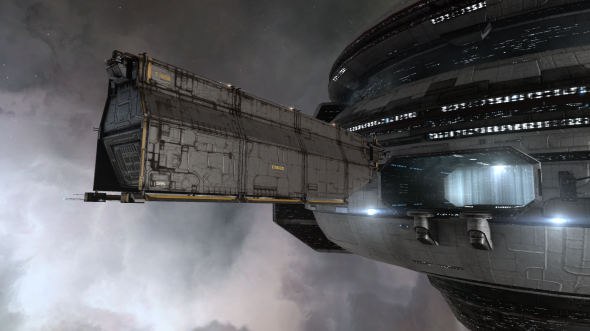 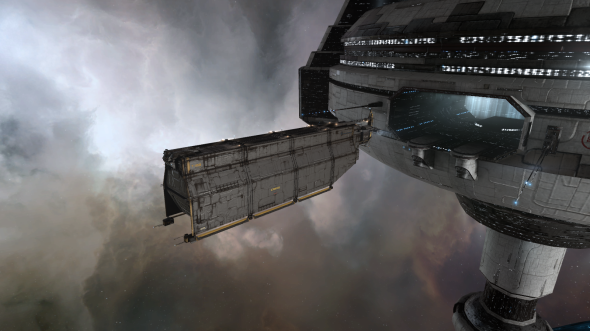 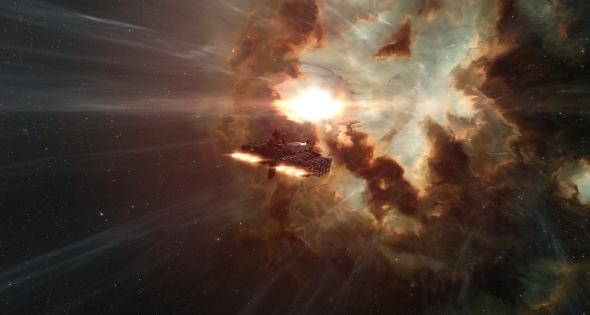 My hangar mainly consists of Industrial ships such as Freighters, Jump Freighters, or Orcas. I’ve always been interested in piloting a Rorqual, but not in the classical setting of a ore crunching vehicle.

I invite the PVP community to offer suggestions for a Battle Rorqual as the fits on BattleClinic are rather underwhelming.

So far I spent some ISK and purchased the necessary skills to enable my polished Thanatos pilot sit in a Rorqual. I am going to train up Capital Industrial Ships to IV as the Rorqual receives a modest bonus on drone damage. Since this pilot was trained for an Armor Thanatos, I will also need to get Capital Shield Operation to IV.

Here are the details on the Rorqual bonus with the drone bonus highlighted as it is what enables this hull to excel with drone based combat.

Capital Industrial Ships skill bonuses:
-5% reduction in fuel consumption for industrial cores per level
5% bonus to effectiveness of mining foreman gang links per level when in deployed mode
50% bonus to the range of Capital Shield Transporters per level.
20% bonus to drone damage and hitpoints per level.

Can use 3 Gang Link modules simultaneously.

Note how the Capital Industrial Ships skill is up from the old NPC price of 450 M. CCP recently changed pricing for NPC skills in a Retribution patch. 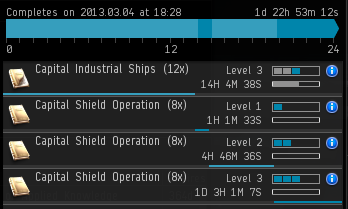 First pass at a fit: 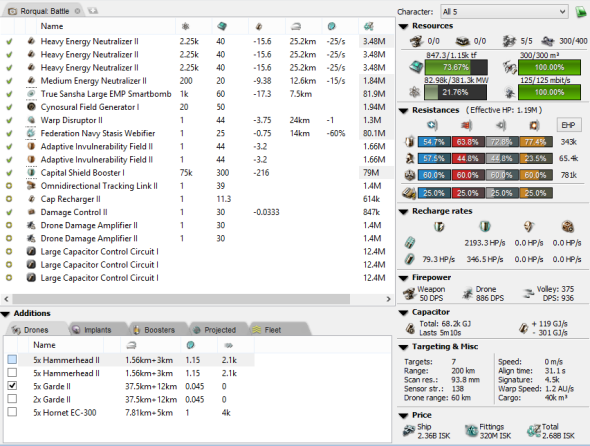 Along with the rebalancing the roles of the mining barges, their mineral requirements were also adjusted. The build requirements for the Tech 1 barges about doubled and therefore the BPO NPC price was adjusted to reflect the new value.

Here is my research on buying Procurer BPOs at pre-Inferno 1.2 prices to sell after the patch.

[Aug 9 update] It looks like CCP changed the NPC price in the Inferno 1.2.1 patch.

Since these BPOs are only seeded in the Outer Ring in two ORE stations, I was able to get a good view on how many were bought by using the market window. 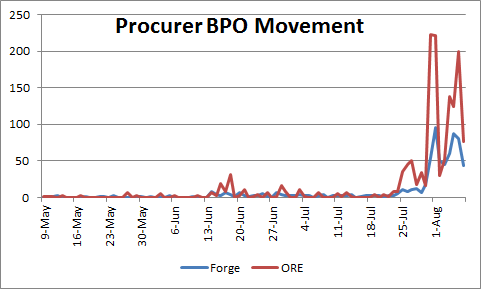 Out of normal BPO purchases in ORE space amounted to 1,264 units starting in late July.

CCP changed the values before going live. They had a different number published on the Test server and knowingly seeded a different value on the live server. *shakes fist*

I looked considered the increase in BPO price, the new role, market velocity, and added in a little bit of my own gut feeling. This showed that the Procurer BPO was the item with the most potential for profit.

Given that these were purchased for 450 M and are now worth 0.838 B that means 491 B was created from nothing, or about 2% of the normal 24 T ISK faucet amount stated in the 2012 Fanfest presentation. This amount doesn’t seem too noteworthy.

In 76 days about 124 pre-Inferno 1.2 Procurer BPOs moved in Jita slightly above their NPC price of 450 M. If 1,264 out of normal units and around 561 move in Jita in the same time period, that means it will take about 1,118 days (3.06 years) for this stock to clear assuming that demand remains the same. 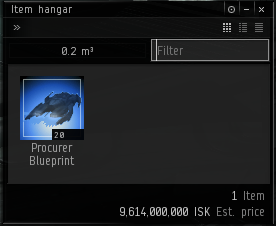 I bought 20 Procurer BPOs at the old NPC price for a total investment of 9 B. Taking in account the new price of 0.838 B, we can value them at 16.8 B. This shows a 7.76 B increase in the NPC value of the items. I was expecting more profit, but that’s what you get when you speculate on patch day.

I have a few options on how to turn a profit with the BPOs:

I plan on doing all three to help spread the risk and start to get a return on this speculation adventure.

Well… we as the WH and nullsec miners of Eve have kinda screwed ourselves over with this. Most players who read this blog probably already know why mega prices are currently in the hypothetical shitter of a race of toilet-people, but for those who enjoy shooting things in their spare time, let me give a general summary. I’m not a marketeer, but I like to think of myself as knowing at least a little. 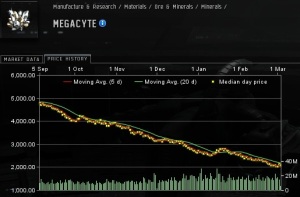 Insurance on everything T1 is essentially a cap on how low mineral prices can fall, because once the mineral and manufacturing costs of say, a Drake goes below that threshold, industrialists blow their products up for ISKies. The clever way the eve economy has found around this little cap is an overflow of mega and zyd, via WH space and nullsec.

In any case, this system used to work because there was not very much ABC avaliable. Miners had two choices, to mine in highsec or join a nullsec alliance that operated deep in nullsec for ABC. Then came Apocrypha, with its WHs. Initially, the combatants of Eve went in and carved a oily swath through the sleeper population, idly noting the presence of ABC roids amist the floating sleeper arms and limbs that they grafted together to make T3 cruisers.

After Mr. Wizz-bang-shooty-fun had essentially reduced the sleeper population into little flying bags of ISK with Hadoken beams, Mr. Industrialist perked up his ears at the mentions of ABC. And so the miners who were given a choice between working for peanuts and working for nullsec alliances chose…. I mean WH mining.

After the first few tentative steps in which the miners learned how not to die, stopped using T2 rigs and faction boosters on their mining vessels, they started mining. Quite a bit. This mining operation reached full swing about the same time Dominion came out, and with it nullsec roids. Not ordinary nullsec roids, however. These roids… were infinite. In all fairness, WH roids are infinite too, if you know how to work it.

So essentially, everyone who was bored with highsec mining(90% of the highsec mining population, excluding macro miners) went to the new nullsec belts or W-space, and about…half of them got shot to hell so quickly and efficiently that they went straight back to highsec. Those who remained, with large piles of the best roids in Eve, quickly turned those into large piles of ISK, so quickly that they were having to import Tritanium from highsec to build stuff, which was viable because they could spend an hour mining Bistot and buy three hours worth of Tritanium.

Unfortunatley, the WH miners, being unable to focus on making ships because of lack of stations, safety, ectera, couldn’t make ships, so they carted their mega and zydrine to Jita and sold it, possibly more than the market could handle, at about the same time that tritanium was being bought in droves by the nullsecers. All of this has shifted the balance of nullsec/highsec ores towards tritanium, increasing it’s worth until enough people say “f- it” to null and WH mining to increase the rarity of mega and zydrine so the price goes back up so people go back into WHs and nullsec so the price goes back down so….

So, who here that mines in null or WH is gonna wuss out first? ABC prices have dropped to about 60% of what they were last summer, and the price is gonna keep goin down. Or it won’t. Or maybe it will. Who knows? 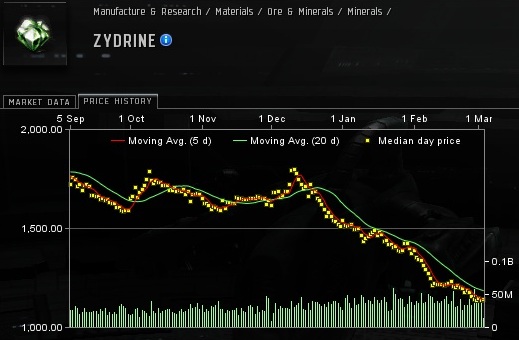 All I know is, I’m not moving from W-space. They’re no rats here, no can flippers, and the roids don’t explode after two or three cycles. You control who can come in and out of your WH, to a degree, and wardecs mean nothing. My corp’s in a wardec atm, and we’re still mining away juuust fine, w/ rorqual support even. It’s everything nullsec, but without a cap fleet breathing down your neck.

Wormholes: how not to die

To date, I’ve lost two hulks, a covetor, a vexor, a thorax, several Itty Vs, two pods, three domis and a large tower to the WH.
BTY if anyone finds the tower “Calculated Risk” floating in a C6 somewhere and can get me a route there, drop me a line.
45. Don’t type a blog post while mining in a C6.