If you have ever owned a POS you know the joy of fueling — or should I say continually ignoring the fuel alerts until your POS is about to go offline. 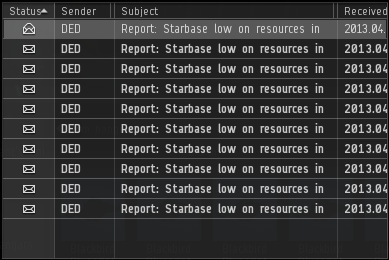 Since my main characters are pushing 90, 60, and 50 M skillpoints, I forgot what it is like to not be able to perform basic functions like fly a Badger, use a Expanded Cargohold module, or Cargohold Optimization Rigs.

My research alt in the POS owning corp is a character with around 2 M skillpoints focused for ME/PE and remote laboratory work. When I logged on to fuel the POS, I thought the operation was going to be a simple one. Grab a Badger, some fuel, and warp to the POS.

Error. A Badger requires Caldari Industrial to I. After attempting to add that skill, I got a warning that I needed Caldari Frigate III. Uf.

Fine, I’ll queue up all the Frigate skills to III so I can add Racial Industrial to I.

Since the POS was going to go offline in a matter of hours, my solution was to use a Frigate with Expanded Cargohold I modules to temporarily alleviate the problem until a proper Industrial ship could be flown.

I present to you my hauling Imicus. This beast is capable of hauling 129 Fuel Blocks (just over 6 hours of fuel time for a Medium POS), no DPS, and terrible align times. 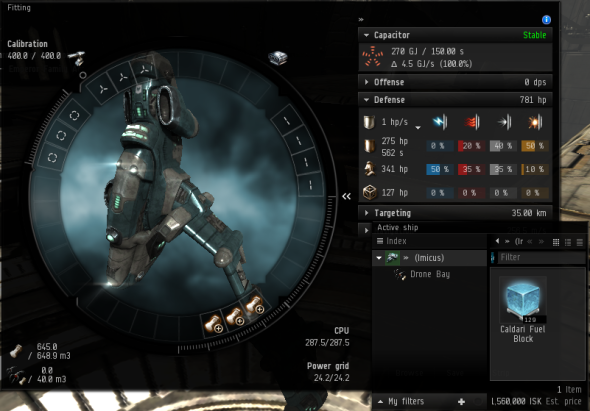 Quite the humbling experience that brought me back to my first year in Eve when I ‘couldn’t do anything’.

Our Highsec industrial operation had a minor setback last week as we logged on after a few days out of game to discover an active and then closed war declaration.

We had a Highsec POS setup a few jumps out from Jita and it looks like we were targeted by a group of people looking to clear our tower. It seems that there is a profession out there where you hop corporations clearing POSes from Highsec.

After researching their activity on Eve Who, Eve-Kill, and strike pattern on Dotlan, I haven’t found any reason that we were specifically targeted besides our proximity to Jita. I’ve also been unable to link a sale of a open Highsec moon on the forums to them.

Always remember to write off the cost of a POS as soon as you purchase it. Assume you will not be recovering it as random acts like this can happen at any time.

Nothing of value besides the POS and modules was lost as all BPOs were kept in the Corporation office in a station and researched remotely.

I recently reached out to a manufacturer to start buying boosters in large quantities since I lack the POS reactor setup necessary to create my own. The deal was for a bulk order of around 500 M with delivery to any lowsec/NPC nulls system. Since some of my production characters have found a new home in a NPC pocket of nullsec, I requested them to be delivered there.

I thought the manufacturer would use a jump capable ship to transport the goods, but I was wrong. A few days after the expected delivery date I contacted him and it seems he used a Transport Ship and got caught by a Sabre — always watch out for the Sabre. 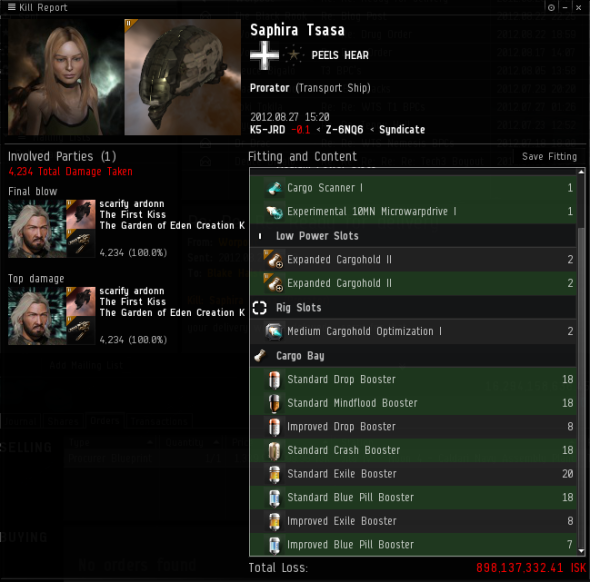 It also seems that this loss caused some corporation drama.

From my experience in some of the larger nullsec organizations, there are only a few Booster producers in every group. At the height of the Northern Collation, I recall that 90% of the boosters were being made by two people. I wish the trade was more diverse and stealthy and not dominated by a few major players.

I’ve spent a lot of time designing API driven KPI style dashboards for my industrial operations and given the industry changes coming as detailed in the Summer 2012 CSM7 minutes, I want to share my designs to (hopefully) inspire people for upcoming Winter expansion (I wonder if CCP’ers read this blog).

My mission statement with these was to use a clean, elegant format to give a high level display into my industry operations while using Eve icons and market prices. I should be able to tell the materials and price/profit for items at a glance without referring to other menus, applications, or looking up historical prices.

The below shot is active industry jobs. I want to know what is being used, who is using it, current and future ME/PE/Copy numbers, and a pretty display for the job progress.

Another dashboard that I created was capital jobs only. Since these jobs were so long, I wanted to be able to see them progress on a calendar. This has allowed me to keep idle blueprints busy and schedule large-scale builds since capital jobs require large amounts of minerals.

Though the current Eve client does display industry jobs, I find it to be inelegant.

The information displayed is all text, almost like I was reading a database table. Also, I am constantly switching between filter options as the window does not remember my past settings.

When I experimented with supplementing my POS network with PI items, I wanted to be able to display my PI network. I needed to know who owned the item, what is was producing, the output quantity, and how much ISK/day that operation was making.

Additionally, I did some work with the database table for PI items (wonderful self-referencing table) to show me what items up the PI T0 to T3 tree I can currently make given what I am extracting. The page ends up being quite long as it displays all tiers so I cropped this shot after T2. The red marks next to the T1 items mean that I don’t have the T1 items in stock so I can’t make the resultant T2 item.

This is a great example of my ‘high level’ approach. I can now easily answer the question of “can I make Robotics?”. No, I need to be making this at T1 and this at T2. I don’t have to spend time looking at blueprints and their requirements — no additional pages or reference material. 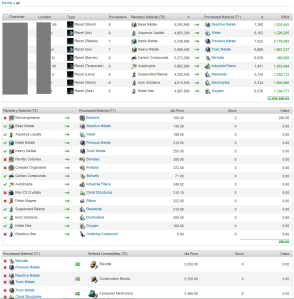 Tech 2 manufacturing can get quite complicated. I was spending a lot of time checking what I had in stock, the build requirements, and final costs. This page gives me the ability to simply move a blueprint from the left column (stock) to the right (build queue) and it queries the database to display everything that I need to make that item.

Multiple blueprints can be added to the queue and materials are aggregated together. This allowed me to place all my blueprints in a queue and create a shopping list of things I need to create the run.

The same story continues for capital ships. I can select my BPO/BPC, the ME level, the character producing it, and the production station. When the location is picked the bottom panes pull from the assets and tell me what I have in stock and what I need in order to complete the job. 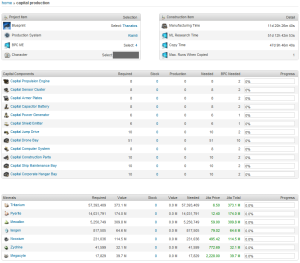 I want to see a reduction in the amount of clicks and an increase in the amount of user feedback and intelligence given to the user. The displays should not just be a simple static display. They should be more dynamic — pull from your inventory when you select a production system and tell me what I need, display a build quote that doesn’t require me to have all the items or know their build requirements, and use the new Inferno universal market price for items.