Vital Core sites are some of the harder Ladar sites in WH space. Each one can spawn up to 2x Advanced Sleeper BS’s which will web and scram. If you have not read Islands among the Stars: A Guide to Everything Wormhole, please do so. It has invaluable information on WH tactics and types of WH sites.

My WH partners and I gathered our PvE ships and decided to take on the harder Ladar sites in order to get at the higher end gas. Our fleet consisted of BS’s with a logistical Dominix fitted with Large Remote Armor Repair System I‘s and Heavy Armor Maintenance Bot I‘s.

Our fleet performed rather well. As the Sleeper BS’s switched primary targets, we switched our reps. No ship got deep into armor and we successfully unlocked the 2x Ladar sites.

With our Orca boost, our cycle times went down to 23.6 seconds from 30 seconds. Overall it took 12x Gas Cloud Harvester I‘s around 5-6 hours to clear both sites. I’ve got my alt set on getting the skill up to V so he can use Tech2 harvesters which should drastically cut the time down as the yield per cycle will be doubled.

A week’s worth of WH mining exploded outside 4-4 in Jita last week under the guns of a ganking Hyperion.

A recent Eve forum post got me thinking about better hauling tactics and how to deal with passive cargo scanning gank ships. From now on, I am not going to haul anything more than 400-500 M in one trip and I will load up the minerals in Giant Secure Containers.

What are some of your hauling tactics? 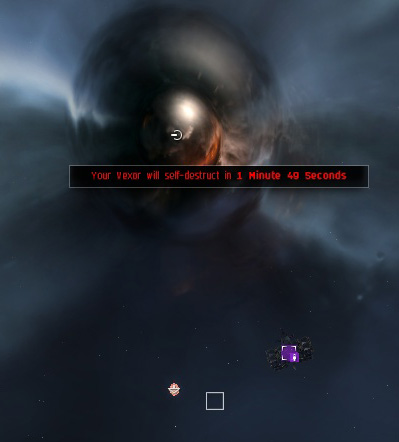 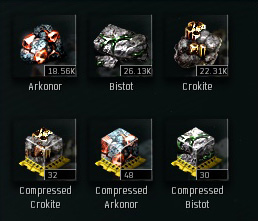 Calling in for Corp Help

Posted: 2009-10-12 | Author: Blake | Filed under: wormhole | Tags: c5, industry, mining, profit | 5 Comments
My WH partner and I called in mining support from our corpmates as there was just too much ore for our 3x Hulks to handle in our new home system. 6x Hulks worked on two Exceptional Core Deposit this weekend and mined the following:

This totals around 7 M M3 of minerals that need to be refined. We had to put up 5 Corporate Hangars to hold all of our ore! 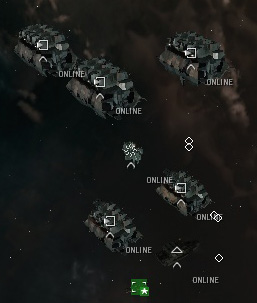 Right now each member is looking at around 400 M ISK each and we haven’t even touched the following sites:

Posted: 2009-10-10 | Author: Blake | Filed under: wormhole | Tags: capital, carrier, pos, ships | 6 Comments
We packed up and moved into a neighboring C5 last night. My WH partner and I found an excellent new system with some 35 signatures:

Core sites in C5 WH space usually have around 1 to 1.5 B worth of Arkonor, Bistot, and Crokite guarded by a Sleeper BS or a BS and two support Battlecruisers so we jumped at the opportunity to move into this new system.

Our move procedure is as follows:

Why not just launch a Large Tower and do the move in one step? Well, a small tower can be up and running in 15 minutes while a large tower can take over an hour to bubble. You can land and claim a home in a new system ninja-style with a Small POS. While moving an interesting thing happened.

In between steps 3 and 4, my alt was attacked and podded by a Phobos (Heavy Interdictor) and a support Battlecruiser right outside the connecting WH between our old and new systems. I was able to identify the gankers and warn my partner. We immediately stopped moving all valuable assets and switched our main accounts into Covert Ops ships.

If you are a anti-pirate WH corporation, set Endless Destruction (END..) to red; they attacked and podded my alt character and began a POS assault.

My main character was at the Small POS and within a few minutes, the Phobos and support Battlecruiser were outside the Small POS. Next a Carrier arrived, followed by two BS’s, a Nighthawk (Command Ship), and a T3 ship. It seemed that they want all the juicy ships inside our Small POS and were hoping that we didn’t have any Strontium. 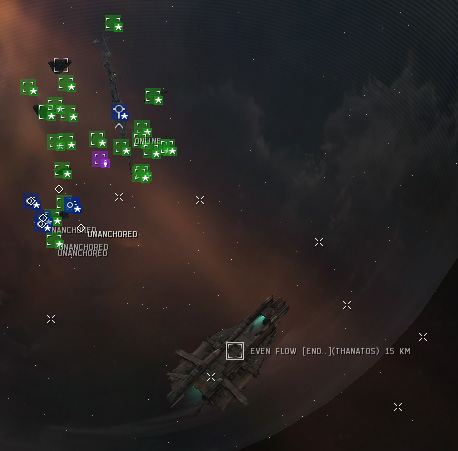 Bouncer I‘s were launched from the Carrier and then the missile/laser spam started. We had a full complement of Strontium in our Small POS so we sat and waited. My WH partner zoomed around in a Covert Ops, watching them in our system. They came in from a neighbor C5 system that we had not yet explored.
A hauler came up on directional and was soon at the POS. Two Mobile Large Warp Disruptor II‘s were setup to enclose our POS in order to lock down any ship trying to get out.

These people apparently meant business and wanted our POS down. After around 1.5 hours of POS bashing, we went into reinforced mode with a 1 D 16 H timer. Their guns went silent and every ship remained still for a number of minutes.

I knew they were chatting about what to do — keep a scanner ship logged off in system and scan down an empire link for them to attack once were out of reinforced mode? simply leave the system and forget about us?

After 5 minutes, ships started to warp off or dock up in the carrier. The Mobile Warp Disruptors were taken down and they left the system. Whew. It was very fun to watch as I have never been on the offensive end of a POS attack.

If we didn’t have any Strontium, the bubble would have gone down. Multiple Battleships, support Battlecruisers, an Orca, and haulers from every race would have been theirs for the taking — a multi-billion ISK loss and a podding back to Empire.

A few hours after they had left, we finished hauling over the Large POS from the old system and got it online in the new system. Ah, so nice when that Large POS bubble goes online.