My Jump Freighter is a workhorse. I probably spend more time in it than any other ship. Ships, ammo, POS modules, POS fuel, minerals, and salvage all need to be moved around in nullsec.

Please take a moment and send a thank you evemail to the Logistical pilots in your corp/alliance.

A few month ago, I set out to reduce the Isotope cost as much as possible. One way on the round-trip into our nullsec staging system was consuming 21.2 k Isotopes with level 4 skills. By polishing them off to V, the consumption is now 14.7 k.

Sins of a Gallente Pilot

While listening to Voices from the Void Episode 13 podcast, the topic of Hybrid balancing was brought up and I agree completely with what they stated about them. Blasters do insane amounts of damage… if you are 7.5k or closer to the target ship. Rails do moderate amounts… as long as your target is not moving.

Oh dear how did Exhumers get in there!

My mouth has been watering for a Strategic Cruiser for a while now and I just couldn’t justify the Proteus as a PVE ship (though seeing them melt ships at point blank range in AT9 was a-mazing). Scorch Legion? meh. Loki? Now that’s a nice PVP ship if you have the ISK to put on the line.

The agreed upon standard for running missions and sites in nullsec is the mightly Tengu. After rounding out some *sigh* shield and missile skills, I bought some goods.

Here’s the general PVE fit that I got from a friend. I might change out some of the items for higher Meta items since I have some spare ISK. 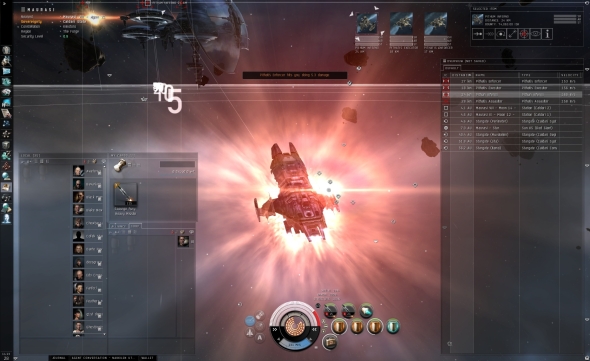 One of the popular items that I sell has been slowly dropping in price due to an influx of new traders. The Jita average is about 58-59 M. Over the week, the price slowly fell below Jita prices to around 57 M.

Buyout time! I dropped 619 M and bought up the stock that was below Jita prices and reset the price to 65 M.

I’m making about 8 M per unit so I expect about 88 M of profit for all of the units. My advice to traders is to not be afraid to sink money into an item and reset the price. If there is sufficient movement, do it.

Welcome Back to Null

So we left WI when they went the goon way, and went to highsec. I had a modest stockpile of isk left over from various rat-related things, so I bought two covetors and multiboxed in a belt with a friend of mine hauling. After a few hours of this I refine it at station, haul it to jita and split the profits with my friend 50-50 because hey, he’s new.

For two hours of goddamn mining. I realize that readers of this blog and/or russian mining bots mine in highsec all day and love every moment of it, but FUCK, that is the second worst use of my Eve time, the worst of which being arguing in public channels.

So me and the rest of the corp said “fuck that shit”, a few…bodies later and we’re in Imperial 0rder. Yes, that’s a zero. No, I don’t want to talk about it. We’re currently down in Omst, and if you’ve never heard of that region, there’s a good reason and here it is: 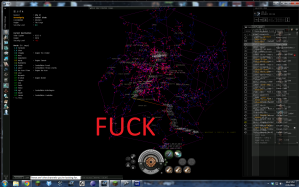 So, ass end of nowhere and very little to speak of a JB map. Screw it, I grab my orca (Lebius II, Lebius I being lost to russians who fleetwarped me into a gang one sleepy morning) and prepare to jump all the way down there, starting from the staging system keb….keber…kebi… kibbers. Yeah, that sounds right. I manage to get all my assets shoved into the orca, all the alts down to Kibbers hours before we get into the alliance and the wardec that they mentioned but we forgot goes live.

I’m sitting around arguing in public channels when suddenly, alliance chat. We say hi, then our CEO says in corp “get yer asses to hek, we’ve got a wormhole from there straight to Omst.”

So, about eighteen jumps. Through Amarr. And a wardec just went live.

If any wartarget alts watched an orca being scouted by three pods through highsec space, they made no comment.

So, mining, in nullsec, yay, it’s more profitable, still boring tho. Until a red appears in system.

Oh wait, he’s in station. Apparently this space was taken by us from Russians a while back.

ooo, he has shit to sell and has no other option. I like it. Convo him:

He opens trade with me and dumps a metric shit-ton of items in. 300 1600mm armor plates, 150 arbalest cruise missile launchers, 200 fucking afterburner Is, ect, ect. We go back and forth trying to get the other person to make the first offer, which is really hard with whatever translator he’s using.

I’m thinking about leaving convo, when I look at the trade window and he’s accepted by accident. Heart pounding faster than the time I almost lost my orca to a russian gang, I click the “accept” button. BAM, shitton of items in my hangar and he doesn’t seem to notice because he opens ANOTHER trade window and fills it with even more items. Completely random stuff, like 30 scorch Ls and 20 cap recharger IIs, halo alpha, ect ect.

It’s worth noting at this point I have no idea how much this stuff is worth, except that the scorch Ls are 30 mil total, the halo alpha is about 50 and the halo beta is 60, along with the fifty or so t2 items that should be about a mil each.

I put in 200, he accepts trade and leaves. Says this in local:

If anyone reading this is in I0 or any of our allies and we have a “no buying shit from russians trapped in station” then I’m really, really sorry.

I take half the stuff and reprocess it with perfect skills, comes out to mostly trit, pyerite and mex. Contract it to our resident carrier builder, BAMN 500 mil.

I take the other half of stuff, including 200 Quad lif fueled booster rockets, and shove it in my viator, start taking the route back to empire for better prices.
(again to any I0 leadership, I put some of the stuff up on local markets for a very small markup over jita price, don’t be mad)

Pipe is nice and empty up until a regional gate, which has 5-6 neuts in local. I suspect a camp, but the gate I need to go through is too far away from any of the damn celestials for me to ping it on the directional.

So I start up minecraft, which is going well. I made a cave!

I tab back after a while and oh hey, Raath’s in local. We wave in another channel, and he asks me the gate status. We compare options and ships, as he’s in an executioner and I’m in a viator. We bounce various ideas back and fourth, and at some point I warp to him at a safespot. I tab back to minecraft and make the cave a little bigger. Tab back, and he’s talking again about how he warped to gate at 100km, got killed but didn’t get stuck in a bubble so I should be fine.

Sweetness, I warp to gate at 100km cloaked so I can get some safes up while cloaked.

Let me say that again.

I warp. To the gate. From the same safespot Raath warped from. At the same range. Knowing he had been killed.

I land on the gate and instantly get decloaked by Raath’s frozen corpse. Two dramiels 60km away from me. My viator makes the sharpest 180 degree turn I’ve ever done and I somehow manage to get away.

Unfortunately, I am now still in the system with the gate I need to go through still camped, probably going to be bubbled on the vector I just warped in on. Thinking quickly, I eject from the viator and warp to the gate in my pod at 100km, BM my landing point, bug out again, get back into the viator.

I warp to the new BM at 100km, and don’t get stuck in a bubble, manage to keep cloak. I slowboat about to the top of the gate and trade my safe warpin to a blue in exchange for intel on the other side of the gate, clear.

Warp to, Jump through, no longer feelin blue, rest of the way to jita goes well and I put up sell orders. ANOTHER 500 mil.

At this point I go to bed.

Oh wait, I’m not a reasonable person, so what if it’s four in the morning, I can stay up all night!

So I buy a Tengu, get it all the way to Omnst, fall asleep while belt ratting and lose the fucking tengu. I wish I was fucking joking. Still, 200 mil profit, worth it.

So, since I seem to consistently have horrible, horrible subcap losses, I’m going to get me some capitals! what could go wrong?

Capital vs Subcapital ME Levels

While working on some profit numbers for various items, I found that ME levels affect the build costs a little differently for Capital ships than other items such as Battleships or Modules.

There is a diminishing return with each ME level as it is a logarithmic trend. For a Maelstrom the ‘optimal’ ME is around 15, which is about 2 months worth of research. 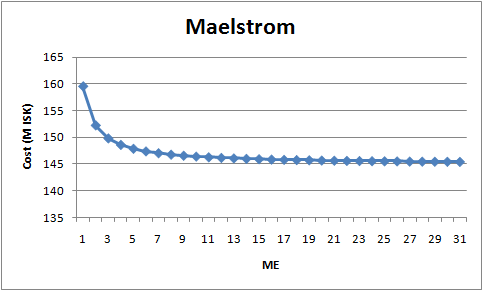 The material requirements for the Obelisk only change at ME 1, 2, 3, 5, 10, 16, and so on. You don’t get any benefit by researching a Obelisk BPO to ME4. You might as  well get it to 5 to remove another Capital Component from the requirements.

I have found the ME charts on games.chruker.dk to be invaluable for this type of information.