A low security exit opened up today to a 0.2 system in the Derelik region. My WH partner got our stock of minerals out and sold them on the market. 580M in 4 days mining ABC’s which means around 145M/day.

Here is my Dominix blaster boat that I use to clear WH sites. My routine is to launch Hammerhead drones to kill off the scramming frigs and then use the Ogre’s to take on the larger BC/BS Sleepers.

Planning on a Rorqual in WH

32D left for my main character to be in a Rorqual with basic jump skills and a long term plan of 78D to get all jump drive skills up to IV.

Now that means that I can fly a basic ship with no good mods. Let’s add them to the plan.

My WH partner and I were talking about how many Corporate Hangar Arrays can fit into a Rorqual when compressed.

4 Corporate Hangar Arrays full of ore has to amount to around 3B worth of ore so that would be a good haul back to empire.

This plan could change our haul process dramatically as we can take the raw ore in WH space, compress it down 20 or 40:1 and bring it to empire to refine at a higher rate. Worth the time and effort? Anyone else using a Rorqual in WH space?

No, not the alphabet — we are talking about Arkonor, Bistot and Crokite. These are the most valuable ore per time and volume in WH space.

Our mining fleet in WH space was clearing 15,000 m3 Arkonor roids in around 25-30 minutes. The operation lasted for around 6 hours and I got a paycheck of 387.5 million ISK which comes out to 77.5 million ISK/hour.

According to The Complete Miner’s Guide, a perfect Hulk pilot can pull in around 54 million ISK/hour. I had my alt in me in a Retriever so that accounts for the extra 23.5 million ISK/hour. Not bad for a Sunday’s work. 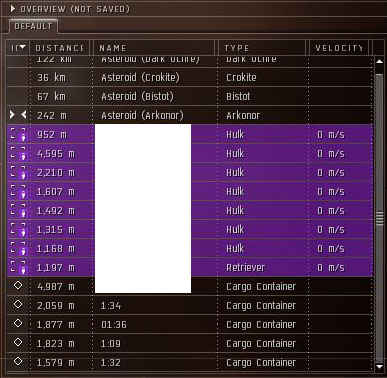 ISK per jetcan (Our EvE)

If time allows, we hit the lower ores to stock up on minerals for corporate production.

Every New C5 Comes with a Nullsec Gank

A corpmate and I moved from a dead C4 into a new, shiny C5 after a few days of waiting and scanning. Our move operation is pretty standard and down to a routine. We like to setup a small POS first, then bring our Large POS with defenses.

So our migration routine is as follows:

Once this is completed, we setup the Large POS with defenses and repeat the migration process.

As I started to bring the defenses online at the Large POS, in came a Helios (Covert Ops Ships) through a lowsec WH from OKEO-X in the Omist region which is deep in Atlas Alliance territory. I started to get a little worried as I knew the POS locations were getting pinned down.

Should I online the guns, or get the rest of the mods/ammo out of the Corporate Hanger Array in the small POS? I tried to do both, warping back and forth, but after a few minutes a saw a HAC and a BS enter. 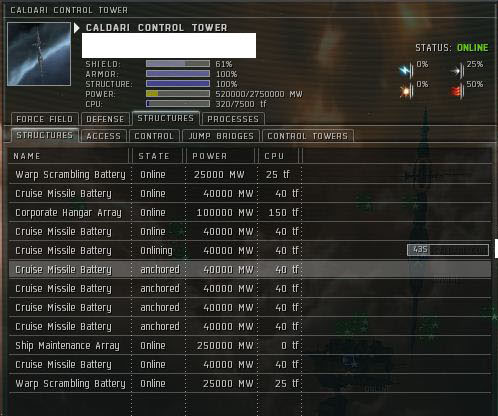 After 5 minutes, the system had a total of 15 attackers in it including a Drake, 2x Hurricane, 2x Helios, 2x Ishtar, Tempest, 2x Phobos, Zealot, and a Armageddon. I knew there was some scanning, bubble and DPS power in that gang. I got in my interceptor and warped to the small POS, knowing that they could have positioned a bubble in my path of travel. I arrived to see their gang shooting at the small POS and bringing it into reinforced mode within a half an hour.

Once I got the evemail alert that the POS was in reinforced mode, the attacking gang suddenly left within a matter of minutes. We had put enough Strontium Clathrates in the Small POS that the reinforce time came out to be 1 Day 8 Hours. I think the gang realized that they didn’t want to offline in WH space and finish the job later, knowing that they were seeing Cruise Missle Batteries being anchored at the Large POS as they attacked the Small POS and that they were most likely not going to get a Omist WH spawn tomorrow.