I’ve thought of a new phrase that fits Eve nicely:

Months and months ago, my alliance owned a small area of nullsec. Being the rookie pilot who had just finished mining ice in a borrowed mawkinaw to pay for his first hulk, I had rapidly become bored of highsec mining. So, being the rookie that I was, I loaded up my Itty V with some lasers, my hulk, and some secure cans and went through 6 red nullsecs without a scout.

What? I was an idiot.

Anyrate, I made it to our nullsec pos, somehow, and fitted up my hulk with a nice tank and got to mining. Eventually, some rats showed up. I activated my shield boosters and hardeners, and watched happily as they failed to put a measurable dent in my shields. Still feeling gleeful, I launched my five hammerheads and slowly tore those cruisers to bits. After 45 minutes of mining lowsec ores, I realized the grill had gone out and stepped out to light it, leaving my tank running in all it’s cap stable glory. After a minute or two of cursing at pieces of newspaper, the grill was lit and I returned to mining to find my pod sitting in an elite mining barge wreck with two battleships and three serpantis cruisers flying around.

One Myrmadon, two Iteron mark Vs, and a Vexor later, I felt that I had learned which boxes to watch for threats and what to do when they came out, in nullsec space.

Three hulks later, in a variety of locations and situations, my hulk “Achnavah V” is flying strong and has survived 3 WH ganks and 4 nullsec runs.

Humans don’t appreciate what they have until they lose it. In the case of Eve, you don’t really appreciate that 100 million ISK ship until you lose it a couple times due to your own stupidity. I fly a domi with a tech I tank for sleeper C5s, and I’ve lost one so far. Give it two or three more, and my fit should be perfected, whereas now it consists of 2 remote reppers, a prototype cloak, a tractor, a salvager, five cap rechargers, and one of every hardener with a damage control and a local rep. Well, it was, until it got destroyed. Still looking for non-buffer fits, and hull upgrades V is 4 days away.

Unfortunately, I haven’t yet been scarred sufficiently by WH space. Last night, I was scanning an exit because we had run out of heavy water, and found myself cloaked 10km off a WH to nullsec with 2 helioses there uncloaked with me. They were russian, and one bout with the online translator told me that he wanted to sleep with the mother of my ship or something. After finishing scanning down the system, I approached the WH to see if it was a good fuel-bringing exit (no luck, nullsec) when, 5km off the WH, something knocked me out of cloaked and I found myself webbed by the helios, who then launched his one drone which began to sloooowly peck at my health. The second helios showed up with a gun and target disruptor and I, being the idiot that I was, tried to employ my afterburner and ECM at the same time, and ran out of cap. Turning off the ecm, I managed to AB to 22km away from the first helios that was scramming and tried to warp to a planet that was ahead of me and to the left. Unfortunatley, he caught me again before I could warp and I wasn’t able to get away from him before I was killed and lost 6 sister probes and a launcher which, thankfully, was destroyed in the explosion. After exchanging various emicons and youtube videos of people mocking the other, I ran back in my capsule to our neighboring WH and got into my backup Buzzard, reverting back to regular scan probes at a 10% reduction in scan strength (and my ship is now called “Lucky Bastard II”, bet that’ll screw with some heads.)

I didn’t notice what knocked me out of cloak, I was watching season one of SG-1 while scanning, I didn’t have even a small shield booster fitted, or a webber, and I froze up in combat.

Yes, I still freeze up in combat. After being caught by several gatecamps and surviving the few by running away, my run away strategy is much better than my fighting skills (9k in gunnery >.<). If I had been calm enough to analyze my environment instead of clicking in a random section of space and mashing the afterburner and melting my poorly managed cap, I’d be 60 mil richer.

So, according to that scenario, I don’t have an accurate grasp of combat itself, WH combat, and expensively fitted scan ships. Once I secure my plex for this month, I’ll grab some more scanning equipment and be a little more careful with WH systems with known hostiles. If history creates trends, then by “Lucky Bastard V”, I should be able to manually fly my Buzzard through decloaking objects 2.5km apart, but it’s gonna take a few more ships to learn the nuances of WH combat. On the other hand, I think I’ve mastered “oh-shit-sisters-fuck-run” WH encounters, after losing… 2 hulks, a retriever, an Itty V and a better-fit Vexor.

Sorry about the lack of updates over the past 2 weeks; I have been interviewing and will be starting my new job on November 30th!

I got my main parked in Jita and my alt mining in WH space. My main has been watching Megacyte drop over the past few weeks to a 6 month low. This has affected T2 and higher end ship prices, brining them to a new low. I thought this would be a good time to spend of the ISK that was sitting idle in my wallet.

I’ve decided to make some purchases before the Dominion expansion.

I’ve got a Proteus on my watch list but this week someone bought out all of the Proteus Propulsion – Localized Injectors on the market at 31 M and relisted at 67 M this week. I’ll wait.

We had an encounter with a rather large T3/T2 fleet from Black-Wing (B-W) Corporation this week in WH space that resulted in two Hulks and a Carrier loss.

Our Carrier pilot wanted to have some fun so he warped the Carrier to 0 on the roid. This resulted in the Carrier coming out of warp inside the roid and bouncing away at 5,000 m/s.

Just as the Carrier was starting to slow down, Combat probes showed up on the directional scanner.

Black-Wing had a good scanning crew and were on top of us within 40 seconds and caught us in a moment of vulnerability. We were able to get 3 out of 5 Hulks back to the POS before the Phobos bubble was up. To our dismay, the bubble trapped two Hulks and the Chimera Carrier.

The Hulks were destroyed within a few seconds and then they started to work on the Carrier. We counted 11 T2/T3 ships that assaulted the Carrier. After some smacktalk in local, and a threat to take down our POS, or Carrier pilot began his self-destruct sequence so they would not get a Carrier killmail.

After a few minutes, we saw the T2/T3 fleet go off directional and a salvage crew arrive on-site to salvage the Carrier and Hulks wrecks.

The lesson? It is ok to play with your capitals (if you insure them).

A Legion and Tengu entered our C5 system and logged off at some point unnoticed by any of our pilots. When my WH partners came online one afternoon after downtime and started mining, the T3 ships attacked; 2 Hulks down. Later in the day, I thought the system was clear so I started mining; 1 more Hulk down.

At this point the damage was 3 Hulks, so around 300 M in damage.

A corpmate scanned down an exit to empire and found that our C5 linked to a C2 with friendlies, who had a direct link to Amarr. We got a lot of compressed ore, C320, and C540 gas out to market.

We talked about getting the Orca back in WH space from Amarr with new Hulks, fuel, and mods.  We took a defensive approach to the Orca move and fleeted up to camp the WHs. A Dominix, Raven, Apocalypse, Typhoon, Prophecy, and Wolf camped the WHs as the Orca moved back to the POS.

As the Orca finished the jumps from Amarr into the C2, and finally from the C2 into our C5, a Tengu appeared 186 K off of the C2 Amarr WH. 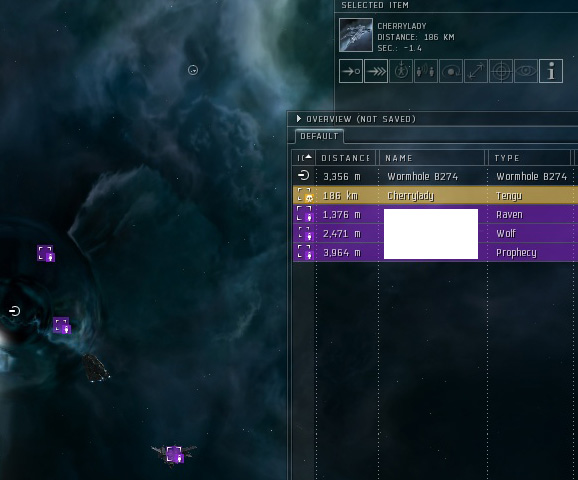 We had a good force, so we decided to engage. Once the Tengu got some fire on it, a Legion and Megathron came online to defend it. We took a beating and lost around half our fleet with no losses to the T3/Megathron fleet.

We retreated into our C5 and the WH linking to the C2 closed behind the T3/Megathron force. We warped to our POS and then sat quiet for a few minutes. The Tengu pilot started to talk in local.

After some more talk in local, we learned that they have been scouting us out for a few days and were staying logged off in our system. They waited for us to start mining and then warped to the Gravmetric site we were working on to gank us. Easily done as we only had 1 active Gravmetric site.

We agreed on the price of 500 M for scanning down a new exit after we had another round of PvP. They agreed and we selected a planet.

We got the Megathron down first and then worked on the Legion. Soon only the Tengu was left and it had one amazing tank. It was successfully tanking 8x Carrier Fighters, 2x Typhoon, 5x Ogre I’s, and other smaller drones. We were not able to break the tank, so we congratulated the Tengu pilot and let him warp off.

We got 250 M for scanning down the C2 WH and another 250 M for the empire link. After salvaging and looting the wrecks, which were full of Faction gear, we came out ahead in the fight.

I lost a Hulk and a rigged Dominix and managed to net 100 M. Not a bad day in WH space.

I’ve always been a active armor tanker so I wanted to experiment with a buffer armor tanking Dominix for Sleeper and PvP combat. Please note that I do not have Tech 2 Large Rail skills yet. What should go in the mid slots? I don’t have any experience with ECM so I am looking for advice. 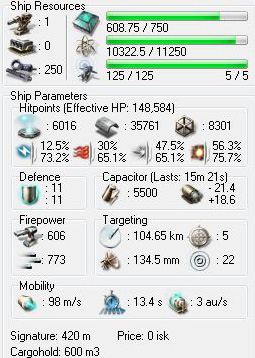