A Tech 3 ship is a great example of an item that has high cross-selling opportunities. A Tech 3 hull by itself it useless; a person must assemble it by combining it with five Subsystem components –defensive, electronic, engineering, offensive, and propulsion. This requirement for flying the ship gives a trader the ability to also stock the necessary Subsystems and increase potential profits.

I have found the Tengu hull to have the most volume out of the four racial Tech 3 hulls due to it’s PVP and PVE applications. The Loki hull is a close second, but it out-shined by the demand of the Tengu.

The real trading power comes from using some intelligence and trending to find the most popular Subsystems. My analysis shows that the Amplification Node was the most profitable and also had the highest average profit. The Fuel Catalyst is also a strong performer as it had the second highest average profit. At the bottom of the list was the Covert Reconfiguration as I accredit the cloakey role to be a very niche role.

25 of the Tengu hull sales included the same client buying one or more Subsystems at or around the same time. On average a person bought 2.6 Subsystems with an average total of 52.4 M profit.

Further analysis shows that the best performance comes from also selling a person 3-4 Subsystems when they are also buying the Tengu hull as the average profit per Subsystem for these transactions types comes in at 21.7-22 M.

After 133 days of training, I have completed a training plan on one of my production characters that now allows me to construct every Tech 3 Hull and Subsystem.

Up next is Advanced Laboratory Operation V and Advanced Mass Production V to polish off the industry skills.

I’ve run the profit potential numbers on both the Hulls and Subsystems and they are both a good time investment. I just need to either wait for a POS rework or grind standings for a highsec POS.

I have little to no interest in setting up a production POS in lowsec due to the ability of any entity coming along and reinforcing the POS. I would rather operate under the umbrella of a 24 hour wardec timer that would allow me to bring up defenses and recover industry items before the war goes live.

June and July were periods of rapid growth, both in terms of buying power and activity spread. I’m now able to have my fingers in more markets and more item types, helping to spread the risk.

Out performing the liner projection the past three months. 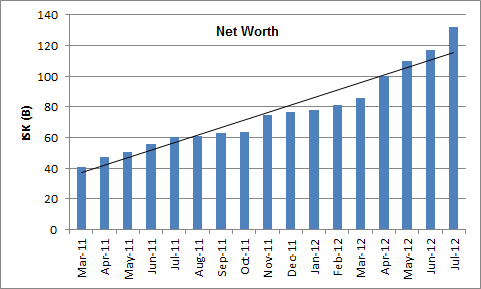 My purchase sprees have grown in volume over the past few months. They keep topping out at larger amounts.  18.5, 21.1, 25.2, and now 25.5 B purchased in a single day. I love seeing the holding account balance go up, but liquid ISK is idle ISK. Throw is back into the market unless you are accruing a balance for a project. 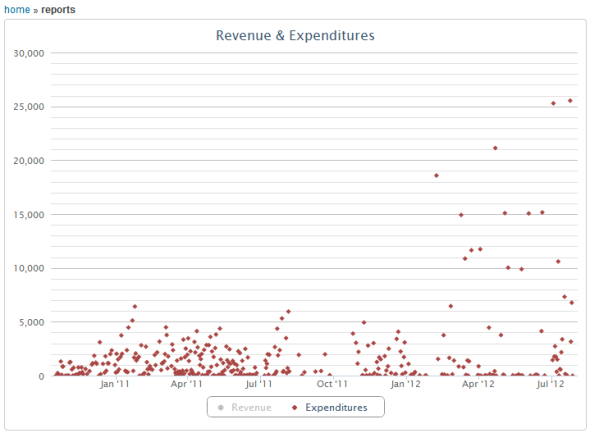 Subscribing to the Bulk Trade mailing list has fueled buying in large quantities. Why buy two Scimitars off the market when you can buy 20 and get a discount?

As of this writing, Cobalt is sitting at 2,800 in Jita so I highly doubt that I was turn a profit on these speculative trades. I didn’t run the numbers after the announcement so I’ll accept the loss on this.

Despite the loss, it was fun to refresh the markets and watch the speculation drive prices. I hope for more changes to the moon market this fall.

This has proven to be a powerful way to remain connected to the market. I’m currently able to monitor sales and purchases. This lets me keep mental notes of what needs to be restocked or adjusted. In the future we hope to expand it with more Android style touch options.

Some ideas that we have been throwing around is that of a cart. If you are about to sell out of an item, it will shade the row and holding down on the row will bring up an action menu. You can look up history, item trading performance, or add the item to a restock cart.

Raath, the author of Staticmapper and DRK Industry Tracker, and I are forming an industry and trading partnership. I’m taking my idle stack of blueprints and putting them to use.

We’re polishing off our invention and Tech3 production skills so we can start to mass produce ships and modules. *sigh* do you know that it is going to take 50+ days to be able to produce a Tengu hull and Subsystems?

The adjustments to Faction Warfare rewards killed profits on implants for me for over a month. I waited for the price to adjust and am back to trading these in high volumes again. In the past month implants are back in my highest performing group and I’ve moved 2,880 implants in the past 30 days.

For those of you that have been asking about my Wallet Manager program I have good news. A group of developers is using inspiration from our team and is coding up a public version for everyone. I chat with them daily on irc.coldfront.net and will have a post about this once we have some public-facing content.

I’m going to get my new partner, Raath, up to speed on the trade operation. He is bringing a large number of production alts so I’m looking forward to putting all our idle blueprints to use.

In addition to the massive stock of Subsystem BPCs that I recently acquired on a bulk deal, I have also picked up a large amount of Tech 3 hull BPCs.

I thought that a large batch of hulls would go along nicely with the production run of the Subsystems so I bought them after running the numbers.

The bulk deal was for enough BPCs to make 443 Hulls. The average BPC price per run on the deal came out to 18.35 M. On public contract right now, a Tengu BPC is trading at about 20-25 M/run.

Construction Skill Prerequisites That I Need

I will need to train up Cruiser Construction to V and each racial Starship Engineering to V. Each one will take around ~22 days to get to V.

I currently have 6.7 M skills in Science on my industry, invention, and research alt so this will help round him out by giving him the ability to produce a large variety of Tech 2/3 ships. 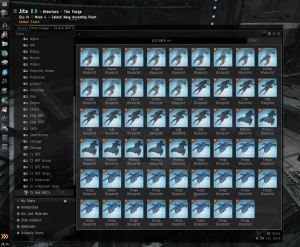 Tech 3 Hulls and Subsystems can only be made in an Subsystem Assembly Array anchored at a POS.

(Note: Tech III hulls cannot be assembled at starbase structures. The hulls and subsystems can only be assembled whilst docked in a station.)

Just the 212 Tengu Hulls will take 7 months to produce on 1 production line. I’m not sure how many Subsystem Assembly Array modules will go live for the run or how many characters will be trained up to produce yet.

Note that the previous profit number does not account for the cost of running POS.

Since the addition of higher level meta items to the market, I have started to find a few niche markets and experiment with trading them on the open market as opposed to the contract market. I knew they were producing a greater return than standard tech 1/2 items, but I wanted to quantify that value.

I used the following database query to get the average margin by meta level for the past 120 days of trading.

It turns out that trading in Deadspace items has been really profitable. Though the sample base for Deadspace is considerably smaller than tech 1/2, the margins have been consistently high.

I have not worked with any Officer modules yet.

Table data in a nice chart.

Though it did not terribly skew the results, the tech 1 value was influenced by  high margins from the new Drone Damage Amplifier I modules that are returning a 92.6% profit.