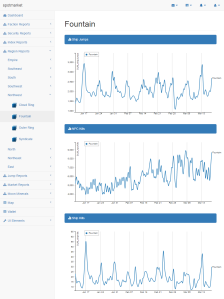 I leave for two weeks and you all accidentally the market. I was not able the participate in the Odyssey speculation, but I am enjoying catching up on it.

The wild swings that we are seeing in the Moon and Ice markets due to Odyssey adjustments made me reflect on the stability of the items that I trade.

I used my historical database to come up with a report to provide quantitative insight to help give values to the items that I instinctively know are high risk. Here is a snapshot of the lower and upper items listed in my Stability Report that covers three years of trading sorted by standard deviation (σ). 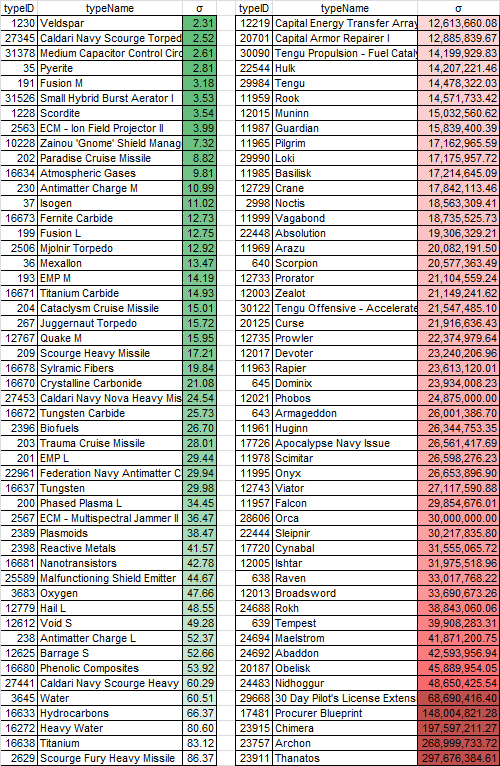 Here are some general observations about the items listed:

A tenant of becoming a good trader is minimizing your risk while trying to maximize your rewards. My advice for new traders is to work with more stable items as shown in the shaded green area of my report; they are subject to less swing and therefore will help minimize risk. As your ISK resources grow, you can move into riskier items that will [hopefully] yield larger returns.

Thanks for all the feedback in the comments. I actually spent some time recently to figure out how to calculate item volatility here https://k162space.com/2013/08/20/hac-price-volatility/. I’m working out how to pull numbers for all my data for a new post soon.

A recent forum post on the official forms included some rabble rabble about how people should not move PLEXes out of stations. Yes, you shouldn’t have to move them around because anyone can have an alt in a trade hub to easily inject them into your account. However, people are lazy. You can make a small profit off of this because it is bothersome to some to login on an alt, check prices, or shop around.

Here are some trading numbers for my ventures with PLEX. Almost all of the 44 traded ones were moved to other stations. 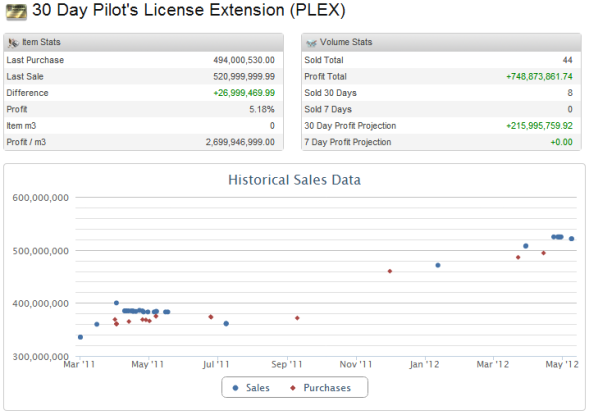 Two years ago a corpmate responded to my boredom comments in corp chat with an offer to come join him in the new frontier known as Wormhole space.  I dove in headfirst with nothing to my name but a Covetor, a Dominix, and some 50 M in ISK.

At this time there were a lot of mechanics and logistical challenges to be figured out. We started this blog to help share some of our discoveries, shenanigans, and encounters in the unknown land of Wormhole space with the Eve community. Though we are currently not active in Wormhole space, I still keep the original mission of openly sharing information and experiences with the community alive.

So cheers to you, the Eve community, for being readers of our discourse. We would like to offer up prizes to everyone that has helped us stay passionately involved over the past two years.

As in true k162space fashion, we’re not going to simply give away a prize to the best comment, worst fit, or hold a lottery (thanks to CCP_OhWell for the wonderful suggestion).

Anchored in J124654, J212203, and J235219 around a planet is a can with a Bookmark. Comment on this post with the Bookmark codename as the comment will serve as your timestamp. Prizes will be given out based on discovery time.

Fire up the scanning probes and get hunting!

Again, thanks everyone for the experiences so far and cheers to another two years!

Edit from miningzen: The cans are at 0 on planet III in all three systems and are called “k162space.com”, no password.

So, about a year ago I won a few of Roc’s Ramblings Advent contests. I got some nice ammo, a cynabal, a few dramiels and other ships I could not fly, didn’t know how to fly and those that know me personally would never trust me with due to my abysmal kill/loss record.

SO, I instantly sold all of the ships, modules and other items that would make a pvper very happy for a week or two to the tune of about 600-800 mil, more than my little mining self had ever seen due to losing several hulks and never really mining anything harder to find than scordite.

Being a bit of a simpleton, I asked around “what would you do with 800 mil”. I recieved various responses like “faction mods”, “rattlesnake”, “awesome mission ship”, “go t3”, and more than a few “give it all to me lulz”

Then, I had a flash of insight: PASSIVE INCOME!

For those who just play Eve to spin ships in station, here’s a list of the various ways you can get isk in Eve, ordered from “most involved” to “least involved”:

This isn’t a complete nor completely accurate list, but I tried, darn it.

Anywho, after several pokes into the various passive incomes, I tried my hand at a pos farm. I was drawn in because it was the only passive income with a large income sum, and because it was something I wanted to do in Eve. So, I spent all that isk on two large towers and anchored them in a C1. Then, apologized profusely and moved to a different C1.

It has been exactly a year since then. Those two towers have grown to fourteen. Weekly maintenance has been about 10-15 hours and weekly cash flow has been about 300-400 mil.

As of this writing someone is blowing up those towers slowly, one by one. They will not be going back up. Whatever I can salvage from the wreckage (let’s be honest, it’s one guy and fourteen large towers, he’s gonna get bored soon) I will sell to fund future ventures.

Let me back up a bit. Typically, I refuel and rotate the towers on a weekly basis, anywhere from friday to sunday, depending on HW that week and upcoming tests, ect. So, this saturday I scan the highsec WH, check it annnnnnddd…..

Highsec island. And since I’m a moron and don’t keep a week of fuel in the towers, the towers will all offline soon. So, I take enough fuel to keep the main tower going for about a day and put alllllll the reaction profit in it.

Sunday night, the WH closes, I scan a new one. NOT a highsec island. I warp the freighter there, gets there at about midnight sunday night, before a 10 am psychology graduate-level class. And I’ve been doing boring stuff all day.

So I play a few rounds of Starcraft 2. Then bed. Wake up, am actually awake for psych class, am halfway to German when I realize that I forgot to refuel the main tower. Logon, everything’s swanky, I run a day’s worth of fuel in and online it. Go to German, leave, log back on….

Corp hangar gone. Carbide’s gone. Shield is up tho. So apparently in the 30 minute window of onlining they killed the corp hangar and hauled out about 360k m3 worth of carbides.

One sec… Nope, they’re not answering so I don’t know if they destroyed or hauled out the 2 bil worth of carbides. Meh.

Just to recap:
For the last year, these towers have been completely defenseless. They’ve all had two hardeners(offlined), have run out of fuel on multiple occasions, the actual main tower has assorted ECM and laser batteries(also offline) and I’m not even sure I actually put ammo in them or not.

And yet, these towers have stood proud against the multiple peoples coming in and out of a C1 highsec WH, devoters, eagles, falcons, ect, only to be laid low by a 2008 character in cane and hound with an impeccable sense of timing.

I’ve been thinking about it, and the only conceivable reason for this sudden bad luck in terms of total operational shutdown is that, for the last few days I’ve had 5 bil or so in wallet due to missing a few plexes and not spending the excess isk like water. This has been expressed to my various friends like so:

haav > hey, guess who has two thumbs and five bil?
haav > THIS GUY!

Murphy, you complete and utter asshole.

Spent 1.5 of that on fuel and reactants for this week, and assuming this hound and cane don’t destroy the 14 large towers, that’s another 2 bil.

So I’ll be using this to catapult myself back into an actual WH for sleeper killing, probably in tengus.

As a related note, I saved all the BMs for my static’s for the last year. If anyone wants all 113 of them for some charting purpose, here’s a teaser:

And here’s the last printscreen I’ll take of my WH. Fare the well, for you have paid a great deal of my account time for very little effort on my part. 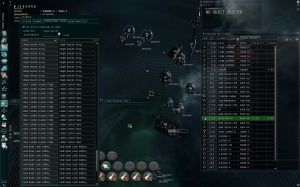