In a previous post, I described the research and assumptions that lead me to speculate on the prices of Procurer BPOs. After 5 weeks, I’ve been able to sell off some of the BPOs for a nice profit.

Market speculation in Eve is high risk and high reward. I always proceed cautiously and try to verify as much of the speculation discourse as possible before making a move. At any moment, CCP could make a change and all your research will be moot.

I was able to offload 6 out of 20 BPOs after the 1.2 Inferno patch for a nice profit.

The market reaction went as expected. Pre-patch there was a lot of market activity as news got out about the change. Market speculators got in and started to buy up stock.

After the patch, the BPO price slowly rose towards the new NPC price, a few large players came in to reset the price to a new plateau, and the volume of trade decreased as demand went down. 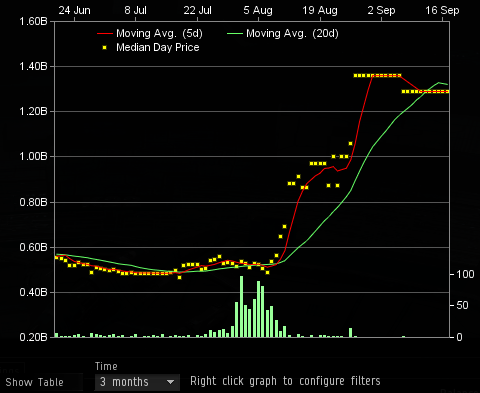 The key to a good speculative move is to get into the market while the price is the same or unchanged and then attempt to sell off your stock before the level of trade leaves you with dead stock.

The top highlight was me winning the 0.01 ISK game of the Jita market.

On the 26th, a trader with a lot of cash came in and reset the price to closer to the new BPO NPC price. I moved 3 out of 6 of my sales on this date. 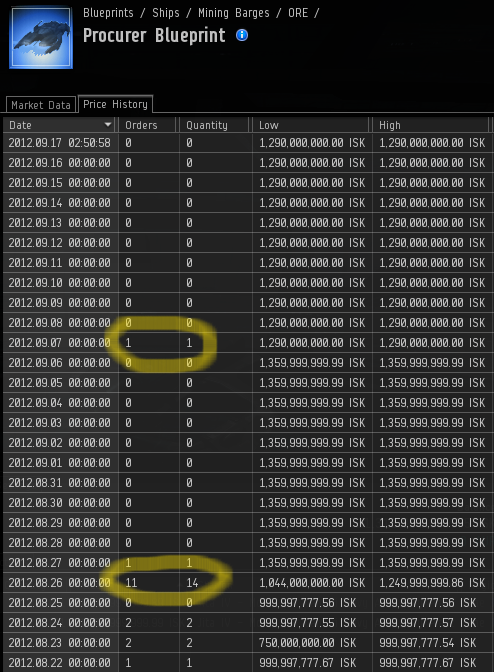 Here’s a snapshot of my trades including the profit.

I’m sitting on 10 idle BPOs at this point. Since my pressure to convert these to liquid ISK is low, I will keep them in my hangar. I am in no rush to sell these off and I can put them into other industry ventures, such as copying or Skiff invention.

Well, there’s been an interview w/ a dev on Tyrannis, so I thought I’d share my opinion and count that as a blog post, where in reality most of you have either read the interview, are currently reading the interview, or are stuck at work or in class reading this on capsuleer. For those of you wondering what the interview is, and/or my opinion on the statments confirmed by the devs, read on.

“We designed the game so that pretty much everyone who plays EVE can have a meaningful experience with the planets. We really want to get people into interacting with planets early. We want to allow them to have some sort of meaningful interaction on them. Although, you will need to be a fairly experienced player to fully utilize their potential.”

I run my C1 PoS farm right now with three alts, with about a mil SP involved. So far, it’s cost me about 3.8 bil. Because of Eve’s exponential training curve, there is very little that a new player is barricaded out from at all, time wise, so anyone with a brain and ISK can manage it. I’m gonna assume that ISK is gonna play a major role in anything planet-related, so a new player per se won’t be barred from meaningful interaction, just someone who’s flat broke. You know, like a new player.

” The actual mechanics of how many people can occupy a planet haven’t been ironed out, yet. But the general idea is that it is not a land grab. The problem is that the planets are going to have limited resources. So if too many people are harvesting a planet at the same time, there will be diminishing returns. “

So… My C1, an area of which no-one but me goes except by accident, had ten planets. I can instate myself as their lord and master? Awesome.

” And you can interact with each and every one of them. Including those that are in wormhole space, which can actually be quite challenging.”

Can I get a fuck yes from all my WH peeps out there inna yard, yo? However, if CCP pulls something like “WH planets make sleeper components while regular planets make PoS fuel”, then I’ll need to replace the window I throw my keyboard out of. Cmon, guys, I’m importing 50 mil of fuel per day. There’s a gas planet in my system. That’s like all the oxygen I could ever need.

“TTH: I’m guessing that different planets have different resources and that the harder a planet is to get to, the more rare its resources will be.

“TTH: Right, right. Will there be a new set of skills that players will need to master?

Torfi: Yes. Absolutely. Your ability to master a planet, to manufacture, build up, and manage it, will be bound by skills. But again, the barrier of entry is really low”

If I have to train “Government management” and it has the prequisite Anchoring V or something funny, see previous comment regarding windows and keyboards. I had to train Anchoring 3 and a basic hauler on my C1 alts to run a PoS adequately, I’m assuming trends will continue and running a planet won’t be too bad.

“It doesn’t require you to sit and grind. You go and you build up infrastructure, but then you set up some manufacturing cycles and infrastructure, and that interacts while you are playing the game. But in general you can actually be playing and profiting from planetary interaction while doing all of the other interesting things that you can do in EVE.”

So…It’s moon mining 2.0? What are you manufacturing? Any more addition to the current t2 production line is probably gonna be a bit overkill.

“TTH: There’s been some talk on the forums about planetary interaction replacing NPC-seeded products on the market. The materials like skillbooks and so forth that players aren’t producing, but that show up on the market anyway. Can you quash those rumors?

Torfi: No, I can’t. Because that’s what we really want to do. But we are probably not going to change all that overnight. One of our goals with planetary interaction is to phase out these NPC created commodities, because we want to put the power into the hands of the players and make EVE even more sandbox-y than it is.”

Oh, so you’re aiming for skillbooks, PoS fuel and t1 BPOs? That’s..good, I guess. Throw in comet mining in WH, make us self-sufficient, and I will worship the ground on which you walk.

“Torfi: From a PvP perspective, in planetary interaction the conflict is more like too many people hogging the same resource. “

So dislodging someone is gonna be nigh impossible until DUST? fun fun. And you plan a 6 month waiting period after DUST is released before letting it interact with the Eve universe?

“We want to take these commodities and move them into the hands of the players.

We are not giving out publicly yet which commodities these are. Even once we put it on the public test server, you will not be able to see what these final commodities are going to be.”

So…stop people from basing their current business plans on what is produced until the day of release? I can roll with that, I guess.

“TTH: Any timeline on this? I know you said it was a summer expansion.

Torfi: The goal is to have it out on the test server in little more than a week. It’s going to be very embryonic”

“TTH: So which is the best WH blog?