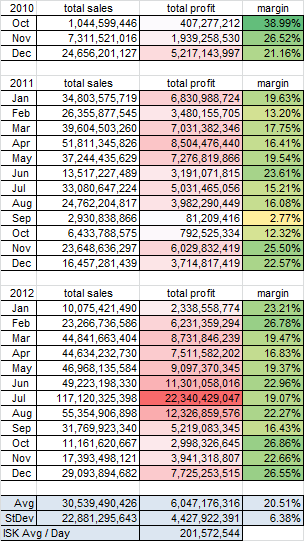 themittani.com has an excellent article out detailing Goonswarm ganking efforts in highsec. Eve Fail responded to this with a post about the impact on his logistics line. I found data for 423 highsec freighter ganks to date in 2012 and wanted to present some hard numbers to illistraute to scale of impact that highsec freighter ganks have on hauling traffic. 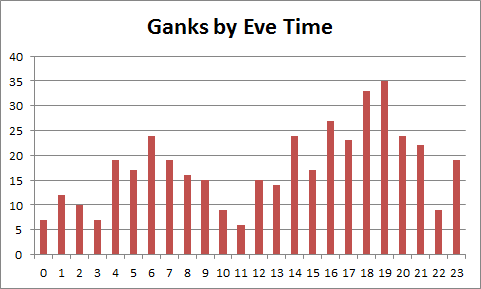 In light of the recent Devblog that outlines changes to moon minerals, I wanted to quantify the scale of income streams that are going to be changing with the Inferno 1.2 patch slated for August release.

Large alliances [in the North] thrive on Technetium income. It pays for ship reimbursements, sovereignty, incentives, and POS fuel. Imagine if you had a 19.3 B/month bill to pay and you could put up a structure to collect valuable goods, a weekly Jump Freighter run to collect the stock from each tower, and a few weekly shipments to market to supply your alliance with billions of ISK per month of income.

If you do some searching, you can find budget sheets for large alliances such as TEST and GoonSwarm. These documents might be a little stale, but can offer us some insight into the scale of income that Technetium contributes to its holders.

An enormous portion of TEST’s income comes from Technetium. As a younger alliance, I imagine that their holding account doesn’t have nearly as much ISK idle as our older GoonSwarm friend; TEST’s summary page shows 162 days of operating capital.

Haven been around for a long time, they have massive amounts of ISK reserved. I’ve been in on a few conversations that have revolved around the GoonSwarm market group and they are working with vast amounts of liquid wealth.

Their budget sheet shows a income of 762 B in and 547 out for a net balance of 215 B per month. Not surprisingly, a large amount of their income comes from Technetium moons.

Accidently All the Moons

On paper TEST has 16 Technetium and GoonSwarm have noted 76. So how much of the total nubmer of moons do these two and the rest of the Northern powers control?

There doesn’t seem to be an exact number of moons, only speculation with a high concentration ‘in the North’. Market Forum warrior Akita T has noted that there is somewhere between 360 and 450 moons with a conservative guess around 400. Taking the conservative 400 number means that only 23% is under TEST and GoonSwarm control so there still is a large amount of income not going into these alliance wallets.

After I get home from work and eat dinner, I usually only have around an hour a night that I can dedicate to Eve. This open hour doesn’t give me a lot of time to participate in any of the large TEST fleets so I am going to help out the war in a different way. In addition to the spaceship war, I am going to launch a fiancial war on the current residents of Delve, Querious, and Period Basis.

One of my trading alts is going to fly around and mess up the markets. I’m going to polish off his skills so I can have region-wide abilities to buy, sell, and modify prices.

Here are some rough goals:

I’m going to start with 31B in funds and possibly scale up to 50B depending on how successful this becomes.

I have never done any type of mass manipulation on this scale so there is a high risk that it will not be successful. I will try to document any significant advancements in my campaign here so stay tuned.