The best way that I have found to make money for the lest amount of effort is stocking nullsec hubs. Forget mining, mission running, invention, or any type of item or ship production. If you spend time doing market research, planing your logistics, reducing your risk, and monitor sales you can make far much more than any other type of activity in Eve.

What follows is a guide for stating up your own operation to stock the warchests of eager PVP pilots (at a profit of course).

I’m using three years of trade and logistics experience to help me outline the operation. Your style may differ, but here is the outlay that has worked for me time and time again despite political change.

If you can parse information in the form of Dotlan map statistics, notice price disparity between two locations, have a basic understanding of jump mechanics, learn to avoid common ganking techniques, and maintain a basic level of proficiency in Nullsec politics you can easily break into this style of gameplay.

Buy low in Jita, move things to nullsec, and sell for a profit. To grow bigger take the profits generated and reinvest in your operation to increase its product scope and logistical power.

In order to properly reach several places and reduce the amount of midpoint jumps, you will need Jump Drive Calibration V. If you don’t have this yet, go train it as it is one of the most valuable skills for jump capable pilots.

A trade alt should have polished skills to reduce taxes and increase capacity, Accounting and Broker Relations to V and then work on increasing the number by getting Tycoon IV.

Start-up capital may vary. I started my operation with 2 B ISK and have grown from there so tailor the scope of the operation to your level.

Finding a suitable hub depends on many factors including traffic, location, and the ease of logistics getting into the destination system.

Using a number of tools, you can find and target the best Nullsec trade hub. Element43 has a market filter that displays active orders per station.

If you have basic knowledge of Nullsec politics, the following systems will standout immediately: VFK-IV, K-8SQS, K-6K16, HIX4-H, and 6VDT-H. These are home systems for many of the major alliances.

The more cyno alts the better. Moving characters around will cost time and slow you down. In my operation I have 5 cyno capable alts around the galaxy that shift depend on where I am currently operating.

A trade alt will remain pertinently docked in the Nullsec destination system and only exit station to light the occasional cyno.

I have a character in Jita that holds ISK and does all of the purchasing. This helps isolate all the purchases to one character to keep my bookkeeping tidy.

This illustration shows two legs on the operation. The Highsec and Lowsec activity can be handled by a NPC character while the Midpoint and Nullsec end is dedicated to your Alliance character.

I use Jump Freighters in this example, but based on your capital the number and types of ships, each setup will vary. When I started my operation I used standard Industrial ships to get around Highsec, a Blockade Runner to get into Lowsec, and a Carrier to perform the cyno operations into the destination system.

There are many ways to find profitable items and I’ve already published some of the things that are very volatile in nullsec in this post.

Logistics Stage 2: Getting out of Jita

A proper Jita insta-undock bookmark is a valuable things. Using this will reduce a large amount of your risk as it will place you off of the Jita undock grid within seconds.

Logistics Stage 3: Getting Across Highsec

There are many options for transporting across Highsec that include doing it yourself or outsourcing with services such as Red Frog Freight. The volume, time, available capital, and risk will dictate what method to use.

If you are just beginning your operation, you will have to be frugal and move items with a Industrial. Later you can move on to Blockade Runners (Crane, Prorator, Viator or Prowler) since their cargo area is unscannable as of the Retribution patch.

Though scannable, an Orca has a large tank and can be used to transport larger amounts of goods than Blockade Runners. Freighters do have a large amount of capacity, but they are often targets for ganking activity. If money is no object, choose to use a NPC Jump Freighter to move items as they offer a larger amount of HPs and align faster than normal Freighters.

Logistics Stage 4: Getting from Highsec to Lowsec

This move can be done with standard Industrials, Blockade Runners, Orcas, Freighters or Jump Freighters. The riskier methods involve scouting the gate on the Lowsec end and moving goods only when clear.

The fastest m3 per time method is to have your goods staged in Highsec in the adjacent system, light a cyno on the Lowsec station, jump to Lowsec, dock, unload, undock, align to the Highsec gate, and enter warp when you reach velocity returning to the Highsec system to begin the cycle again.

Note that I stated to align and not Warp To as a method for killing Jump Freighters is to bump or web reducing the maximum speed below the current speed, effectively locking you in the Warp operation. Read up on the ‘Vindicator Triple Web’ exploit if want to know more about this exploit. If you don’t issue the Warp To command and are aligning, at any sign of trouble you can dock.

Logistics Stage 5: Getting Across Lowsec

Logistics Stage 6: Getting Across Nullsec

Getting into the destination system is the last leg in the journey and the technique used will depend on the Alliance’s use of a Cynosural System Jammer or  Cynosural Generator Array  POS module.

The D2-HOS system in Pure Blind was FA’s capital system and jammed. The best route in was jumping into a adjacent system and scouting the gate. Higher risk, but at the time it was worth it.

Before Widly Innapropirate were absorbed into GoonSwarm, they homed in G8AD in Cloud Ring.  They had an active beacon. If you scouted the system and had Carrier backup, your risk was reduced.

The best method is to find a major Nullsec hub that lacks a jammer so your trade alt can undock, light a cyno within docking range, and let your ship land right within docking range. This technique reduces your risk to almost nothing if done properly.

The most efficient, low risk method of moving items between Lowsec <-> Lowsec, Lowsec <-> Nullsec, or Nullsec <-> Nullsec system is to have two characters in two systems light cynos within docking range of each respective station.

The Jump Freighter will jump in, dock, unload, undock, and jump back to the original cyno. If you are quick, you can get 5-6 jump cycles under one cyno timer. Done efficiently this method can move around 1,750,000 m3 per cyno depending on your Freighter skill level and racial Jump Freighter, both which affect the ship’s cargo capacity.

If you absolutely cannot get a station system as one of your midpoints, you can use a riskier method using an anchored container and a POS with a Cynosural Generator Array module. The goal with this method is to jump in and warp to 100 km to the anchored container, landing you inside the POS shields. 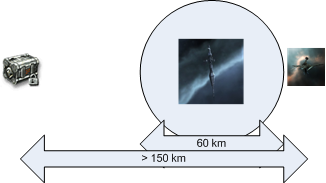 If done correctly, you will only be vulnerable for a few seconds as your ship aligns and warps withing the POS shields. I do, however, recommend that you only jump into the system when it is empty with a character in the system to monitor activity. There is still a chance of an enemy logging off next to the Cynosural Generator Array and logging back in as they see you leave the originating system, but it is low.

When I would perform this type of operation I had a Carrier on standby within jump range of the POS system. If anything went not according to plan, the Carrier came into system to serve as support while the POS guns fended off the attacker or Alliance reinforcements arrived.

Jump Technique 3: Right Out of Jita

A quick, lowrisk method for moving billions out of Jita involves bypassing Highsec altogether as a large number of systems are jump accessible right out of the Jita undock as seen here.

Using this technique, you can put a large amount of ISK into your NPC Jump Freighter and bypass the deadly gank systems of Uedama and Niarja.

Here are two route examples of when I would stock for the former Northern Coalition. The three Lowsec systems of Chardalane, Maut, and Oulley served as three options for extending myself into Nullsec as they were each Lowsec station systems with a connection to contiguous Highsec. If either system was busy with cyno popping pirates, I would switch to one of the other two options.

Route for D2-HOS in Pure Blind for Fidelas Constans before they moved to Branch.

Here is the route for G8AD-C in Cloud Ring for Wildly Inappropriate before they were absorbed into Goonswarm Federation.

If you look back at any of my monthly reports, you can review the success of my efforts. My recommendations for people that want to get involved with Nullsec trade and production is to always keep one eye on Nullsec politics. Take notice of who is attacking, defending, advancing, and maintaining homogeneity; the key to your success is situational awareness.

themittani.com has an excellent article out detailing Goonswarm ganking efforts in highsec. Eve Fail responded to this with a post about the impact on his logistics line. I found data for 423 highsec freighter ganks to date in 2012 and wanted to present some hard numbers to illistraute to scale of impact that highsec freighter ganks have on hauling traffic.