Over the past few days, I gave up on Tranquility and have been playing on Singularity. The new features and changes were just too exciting and Tranquility started to feel like a rusty Minmatar barge. While testing out the new cyno/jump graphics, I saw CCP Habakuk in local and wished him luck with the deployment.

I’m too young to remember the boot.ini fiasco, but I do remember some long, drawn-out deployments for some of the ones over the past 2 years. I have to say that CCP did a great job with this deployment. They took note of some of our ramblings from the last deployment and CCP Navigator even notified us about potential issues before it was released. I for one welcome our new proactive and not reactive overlords!

The #tweetfleet has been blowing up with nothing but praise and excitement and the Devblog from CCP Soundwave was just the icing on the cake! Great job CCP, now… on to the Summer expansion wish list.

Hold on a second

Crucible has been announced with the long awaited supercapital nerf, which makes them mostly tools for fighting other supercapitals and/or things that hold still.

A while back, AHARM was caught using a kinda-sorta-obviously-exploit in a certain type of wormhole. For those who don’t know, some wormholes have special effects, like increasing RR power but decreasing local rep power, increasing armor resists but lowering shield, ect ect. These effects go from barely noticable in a C1 class wormhole to holy-shit-this-3xRR-domi-is-stable when you’re in a C6.

One of these wormholes increased damage from all ships(Sleepers included) by 100%, as well as boosting the strength of all types of EWAR, including tracking disruptors. Some bright spark figured out that if you tracking disrupted someone so hard their midslots swapped places their tracking would go into the negative or go below -1 or something similar that wasn’t supposed to be doable. The result of this was that the ship being disrupted gained LITERALLY perfect tracking and optimal range(250k), if you happened to be sensor dampening them at the same time or something.

Rooks and Kings, some nullsec or wormhole or whatever group whose name I only know because they attacked Split Infinity Radio, attacked AHARM in their home wormhole and were a bit supprised by being hit by blaster boats from 250k away perfectly each time. They petitioned CCP, CCP changed the way that wormhole worked and didn’t ban anyone, everyone went their separate ways.

Now some large group has gained an advantage over another MAYBE through an exploit(bots). They are almost impossible to kill and everyone is still trying to work on ways to counter and/or welcoming their new overlords. And since CCP either can’t or won’t detect and remove the bots, they have gained this power “fair and square”.

(Incidentally I use the term maybe because they might have used the bot money for something other than supers. Like titans or candy.)

Supercapitals aren’t being nerfed because the Russians gained critical mass of them through exploits, they’re being nerfed because nullsec stood on the edge of becoming carebearland and/or Russianland. The game has almost been “broken” through some means because one value grew too big using CCP-Approved methods.

So they’re nerfing supercapitals. If I were the DRF CEO or Director that said “hey, we have all this ISK, let’s sink it into SUPERCAPITALS”, I’d feel a bit cheated right now.

Supercarriers are expensive. Right now, on my “list of shit to do on Eve”, “own a supercarrier” is pretty far down on the list, mostly because of the 18 bil cost and that I’m probably going to lose the damn thing the moment I board it. For me, flying the second biggest ship in Eve defines the “endgame”.

My point is, what if instead of supercarriers RUSEve spent it on, say, making accounts or hiring people to fly with them? Okay, they did that with PL and THEN got the supercarriers, but what if they had taken it even farther? What if fighting RUSEve didn’t mean one unstoppable fleet, it meant THREE fightable fleets attacking separate targets with huge subcap numbers, reps and such. You could fight one, and win, but it would be instantly replaced while the other two wrecked whatever they were attacking. Controlling multiple accounts is not hard, and I could probably write a script or program to control an alpha fleet BS(pleasedon’taskmeto pleasedon’tbanmeCCP).

And also, now that the context of nullsec and supercarriers has defined “Overpowered”, can we please have the old wormhole exploit back? If everyone has it it isn’t an unfair advantage, and it would make for extremely weird/fun fleet fights.

If you haven’t read the upcoming POS fuel change, check it out on the CCP Devblog. Also read over Jester’s review of the upcoming change as he outlines the modification of each fuel type.

How much, how big, and how long? Here are the estimates for running the three sizes of Caldari towers at current Jita fuel costs. 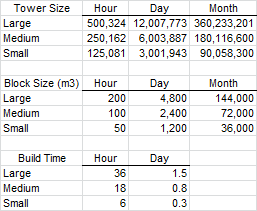 The current icon set doesn’t differentiate the racial fuel blocks with color very well. James at k162space came up with more colorful icons to match the racial color styling as seen with the ECM modules.

James has posted in the comment thread for the devblog and we’ve received some feedback from CCP Dropbear on Twitter. Perhaps the art department will give it a second pass. We would be happy to send along the 256×256 transparent PNGs!

[Edit] As Poetic Stanziel pointed out, color-blind people will have an issue with our proposed icon set. I think if CCP were to add our colorization to the existing icons, which have different metal bases and frames, we could have a real solution.