Some trader or group of traders have been driving up the cost of implants in Jita. All 5 implant types (Cybernetic, Memory, Neural, Ocular, and Social) for all three tiers (Basic, Standard, and Improved) have been heavily manipulated since the weekend.

If you look at the price history, it seems that a lot of people have noticed and are trying to hold out.  No movement was recorded for April 03 across the board for all 5 implant types AND for all three tiers. Wow, this upward pressure takes some serious capital and diligence.

Across the board, the trend is quite visible. Right now there are only 31 Memory Basic implants on the Jita market at 13.89 M. 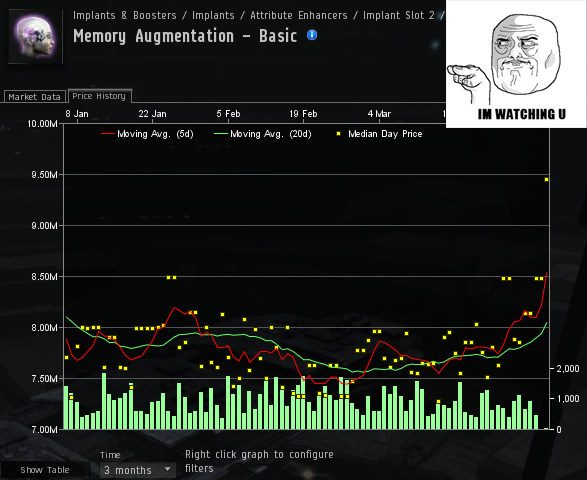 I wonder how long this attempt will last as implants are easy to acquire from LP.

no, YOU’RE a jerk

My childhood was fairly introverted.

That’s a bit of an understatment. I specifically remember a nice girl walking up to me back in elementary school and saying “I think you’re cute”. My brain responded with the thought “IT’S A TRAP”.

So, I was a bit of a shut in. The friends I made either changed schools or turned out to be complete jerks, my parents never loved me, yadda yadda yadda /wrists boo hoo.

Call it a dick waving competition, call it trolling, spamming, griefing, a multiplayer game is built on other players. And in general there’re two groups, with plenty of overlap: Jerks and friends. Adapting this from general multiplayer to Eve, you replace the classes with “people who shoot me on sight” and “people getting me to trust them so they can betray me later with no reprecussions.”

Apologies to the people I laugh with often, a good 70% of you have said you’d shoot, pod, and grief me on site. Yay Eve!

Anyway, Eve’s become a bit of a second social life. All attempts at merging my two groups of online friends and friends bound by the basic standard of human decency have gone horribly, with no Eve friends willing to move within walking distance of me and no nearby friends stick with Eve for more than a week.

I’ve made a post dedicated to recording “lol”s. Admitted, I haven’t updated it recently or much at all, but it’s there. I like to make people laugh, and the internet is basically the worlds biggest audience only they’re not allowed to throw things at you.

I’ve been griefed. I’ve been ganked. I’ve been every negatively-correlated word associated with harm or starting with “ge” you care to name. Through all of it, even as my ship explodes I try to get a laugh out of the killers/jerks. If I don’t get anything, not even a response, then it’s like being killed by a bundle of ones and zeros.

Way back, when UK wardecced my mining corp, I had an itty V full to bursting with stuff for my very first trip into WH space ever. I had been given a bookmark situated in a lowsec system 20 jumps away with a note that said “have fun”.

And UK was camping the station my Itty was in. (this was back before I knew what insta-undock points were.)

UK taunted me and all the other miners/pvpers that were in system. We taunted back, and after a few hours I managed to get the Itty out using a combination of luck, an alt in a second Itty V and several Itty Vs lost to U’K. At some point between Itty V #1 and #2, one of the U’K people mentioned that they weren’t allowed to talk in local. That really doesn’t make sense to me. Sure, in WH space talking in local makes at LEAST three sets of combat probes deploy looking for you, but in highsec there’s nothing lost, aside from pointing out that you’re not AFK, and the lasers had already made that pretty clear. I’ve heard things like “We want to appear professional and complete”, and that seems all well and good for some badass merc corp that wants to paint across the sky “We are professional and stuff please hire us so we get paid for shooting”, but where’s the fun in that? From a griefer’s perspective, what’s more fun, killing a hulk and him just sitting there or killing a hulk as he desperate tries to align and warp off but fails?

My point is, I play Eve less for the explosions and ISK, but for the people to laugh with. Is this some pathetic substitute for a social life or am I playing the game right?