I fail at fail pvping

This time around I planned to actually participate in hulkageddon. So, about a week and a half ago I made two fresh alts, joined them to my main corp and started their skillplans, going for thermodynamics, drone interfacing and the support skills. Then bought 70 thoraxes in jita and 70 thorax fits in Dodixie (thanks missioners!). Three hours before hulkageddon 3 starts, I realize that hulkageddon is going to start in three hours when I thought it was about eight hours away. Unfortunatley, I’m in the middle of garden chores for my grandmother.

One hour, four holly bushes and three car chases later I was at home. I booted up my two laptops, plan in mind. The theory was, I’d appear in system in an orca and two pods, warp to a station. Fit two thoraxes using the station system, put the fitted thoraxes in the maint bay. Warp to a safe, drop combat probes over the belts, pin a hulk, board and warp the thoraxes as fast as possible, land, gank, victory.

So, I get one of my nullsec alts, skilled entirely for a logistics BS droneboat. I start him training med hybrid turret, install a JC in the nullsec station I’m sitting in and pod myself back to empire. One hurtle over.

Then it comes to the orca. For those who just downloaded capsuleer or have short term memory loss, my Orca violently exploded completely due to my own idiocy and half-asleepness. For those not in my corp, we have a t1 replacement policy. For those who aren’t a close personal friend of mine, I’m half British. Thus when my CEO contracted me a new Orca for free, I felt horrendously guilty. Not enough to not use the Orca in stupid/risky scenarios, but still, guilty. Anywho, I found the orca on my main account and contracted it to my orca pilot who was currently working as a BS logistics pilot in null. Orca pilot installs JC in null station, pods herself, back to empire. Update clone, accept orca contract…..

2j away. Much better.

I immidiatley buy whatever meta inertial stabalizers are avaliable in station, slap em on and light a fire under my 30-second align time hull. Half an hour later, I arrive in jita and start fitting the orca for cargo and combat probes.

“you need astronautics rigging at at least 1 to fit this.”

OK, 40 minute train time but that’s not too bad, only two less thoraxes. Start it training.

Alright, since I had all the fits I purchased ahead of time already set, I stuff the 70x fittings of thoraxes in the orca and manage to fit right thoraxes. Here’s the fit:

Best Ion blaster I have at the time x5 (couldn’t find 400 meta 4 blasters for cheap for some reason. Go figure)

Oh wait, one of the alts has drones IV. Damnit!

And the other one can’t overheat. FFS!

Neither can use sensor boosters as that was a last minute change advised by Python Cartel. Who are jerks.

One of the alts can’t use a disruptor. How’d that happen?

Anyway, I start the alts training on whatever I’ve forgotten and manage to undock in the Orca with two thoraxes following her, one with a web fitted. Fast warping yay!

Alright, let’s go to an ice belt. On the way there, I find a hulk. In a belt.

Undaunted, I warp the pods out with the Orca to a safe and start fitting a thorax on one of the alt.

I find a .5 system, load up the combat probes, scan and BAM got a hulk. Fleetwarp the thoraxes, land on hulk, drones, lock, engage.

I forgot to overheat >.<

It seemed like a really good idea at the time

You know me, I like making people laugh. As such, April Fools day is my unofficial holiday, where each year I pull some elaborate heist over a nearby friend, making an extremely trivial change that is extremely difficult to do, like swapping my friend’s car from one side of the street to the other while he sleeps.

This year, I turned my brain towards a simple, yet massive prank: In between the hours of midnight and five AM, I was going to move the WH PoS one moon to the left, then, send a corp mail saying “har har i wuz spy and stole your iskies”.

Plans were made. I wrote the letter, made safespots to hold the ships and cargo, and sat patiently and waited for the day of reckoning. Part A of the plan was to move all the ships, using the Orca or my handy ship command skills to move the ships, then the cargo, to the safe, which was about 15 AU off grid. Part B was to use a blockade runner to unanchor the guns, then the empty corp hangar, then the PoS, re-anchoring it one moon to the left, anchor corp hangar n such, guns, send the mail and go off to sleep. Predictably, things started to go horribly, horribly wrong around Part A and continued to fail explosively for the rest of the night.

At midnight, the American players in corp had gone to bed and the UK ones were not scheduled to wake up for another five hours, I started unanchoring the spare corp hangar while moving the ships from the maint bay to the safespot. I managed most of the hulks, all the Gallente ships and all other ships that would fit into the maint bay of my Orca. Then, the first problem of the night struck.

Raath (maker of staticmapper.com, for all your WH static needs), had recently purchased a Falcon, intended for use in all things jamming and currently floating in space next to the maint bay. This would normally not present a problem, since the falcon fits in the Orca’s maint bay, but he had left a module in it. For the uninformed, when a ship has a module in it it can’t be stuffed into a maintenence bay on another ship, and since I hadn’t taken the five week training session on “how to fly Caldari t2 cruisers”, the ship was going nowhere.

While I was perfectly willing to leave Raath’s Typhoon (Minmatar Battleship) floating in empty space for about twelve hours, a 100 mil Falcon hull was an entirely different story. To leave the Falcon safe, I made a a plan to scan an exit, get a small tower in with an alt, have the alt put up the tower where the old tower was in the name of the altcorp while I put up the Caldari large tower on the one moon to the left.

To make matters worse, Russians with two carriers, two dreads and various tech 2 ships, including a Vulture (Caldari Command Ship), a ship whose skill training time is just under a third of a year.

To make matters even worse, ships were appearing and vanishing along with capsules, so they were active. I drop sister probes, do a 32 AU scan and recall probes. two sigs in system, I look at the size of the red sphere, look at the planets that it encapsulates, pick one on the edge, and warp to it, drop probes again, scan, wormhole.

Mindful of the fact that if WE saw scan probes in system, we would immediately close the connecting WH.

I pop into their static and look around. Static C4, end of lifetime, which means that I can’t risk getting an alt and tower in. I speed back through to our C6, get the Orca (250,000,000 kg) and a calculator, and pass BS and Orca through until the WH goes critical.

Making the first smart choice all night, instead of blindly passing the Orca through, I move my scan alt into the connecting WH, then jump the Orca through. Then watch, as the WH closes, leaving all of my alts on the wrong side of the WH, and no-one but me has the BM for where the ships are. 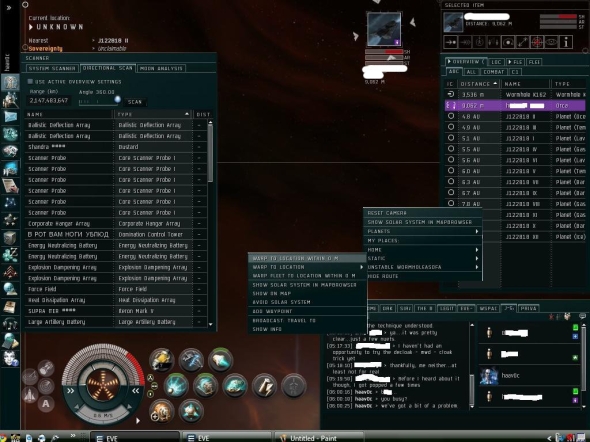 I web the orca through the Russian C6 (noticing scan probes as I do so), flee through the end of lifetime C4 link and logoff he Orca, then start scanning the 35 sig system. Literally, the last sig is the WH, C2, highsec static, Orca gets out, Covops out. 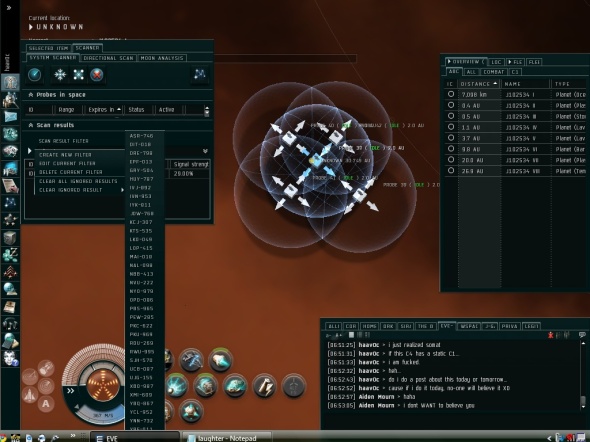 After a string of cursing, I tear through the Russian WH and wake up a corp mate. The corpmate, who logs in his Myrmidon (Gallente Battlecruiser), says that he needs combat probes to scan out the 1.5 bil pile of ships.

Thankfully, someone with more foresight than me had put combat probes in the “we’re screwed” container, which I had somehow missed in my initial “move everything to the safe” stage. He finds the ships, gets them back to the PoS, and we all log at about…five in the morning.