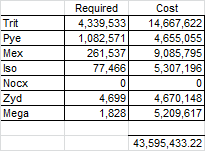 When I first started Eve, after struggling through the tutorial, giving up halfway through, getting lost twice, losing a cruiser in nullsec, lowsec and to some very prepared rats with a warp scrambler(Still have no idea how that happened), I started mining in, in order, rookie ship, navitas, two navitas’, an exequror, a brutix, a retriever, a covetor, a borrowed mawkinaw and my first hulk, followed soon after by my second, third, fourth and fifth hulk.

With highsec mining, you can practically fall asleep at the laser with no problems (Only practically, lost hulk #3 that way), and with WH mining you need to constantly be aware, but with good returns promised. Grinding level one missions, however, is the most annoying thing I’ve done in Eve since I got into an argument with some Dead Terrorist gate campers on whether or not they were simply stargazing. After they blew up my industrial

With what I would laughably call my combat alt, a month old character able to fly up to Caldari BS and baseline missile skills, L1 missions have that special combination of arduousness and simplicity that leaves me irritated out of my mind. This ironically coming from the person who mines for five hours straight often and doesn’t complain about the monotony.

Even with my inhuman tolerance for boredom, these things are irritating. My alt is compitent enough that her caracal eliminates frigate threats before they even know they’re threats, which was fun for the first ten-odd missions, but every other mission, the frigates take three to four missiles before they’re blown ta smithereens, and when you can’t tell which kind of frigate is going to take three missiles, I usually assign two assault launchers to my first two targets and a heavy missile launcher n target painter to the third and hope my missile find some sort of exhaust port.

And, even with the mission type I’m running (Internal security), I’ll eventually get chain missions with courier requirements, which are similarly samey while different enough it takes conscious thought to work out where to go.

Here’s my problem: with mining, you can unfocus your brain to the point that every three minutes, you drag the ore to the can then unfocus your brain again, hence the name “miningzen”. WH mining isn’t too different. You click the mouse every ten seconds, if your directional doesn’t scream at you, you get to live another ten seconds. The excitement and terror wears off about three days after your last ganking encounter and it’s back to monotonous clicking over and over.

With l1 missions, you have to click the mouse all over the place, finding where to go for the mission, who to shoot/not shoot/look at until you get a complete flashy journal, warp back, ask for a new mission. It’s so mind-numbingly boring while at the same time requiring enough thought that I can’t fall into a stupor while doing it.

While missions are the way they are, I’m afraid to ask CCP to change them or for people to rally behind me for more excitement, since if I do they’ll probably make mining more exciting in a completely horrible way, like make you keep your ship pointed at the asteroid or something silly. What I’m asking from the missioners who read this blog to laugh at miners or for something to do as their t2 fitted domi’s slice through L4 missions, is what Caldari ship n fit should I be using to make this task easier? I’m currently running w/ 4 assault launchers w/ random missiles, one heavy missile launcher, two ballistic controls, a medium shield booster, target painter and afterburner. Suggestions?

P.S. Anyone else find it silly that “prototype exploration ship”, the Zephyr, is one of the ship types acceptable for combat missions?

Fly to the warp-point and wait for your serpantis contact to show up.