Over the past few months, I have been trying to find a new direction for my main character. When I first started Eve, I wanted to run missions so I trained up for a Dominix with good blaster/drone skills. Missions got repetitive so I trained up Invention skills and started to do some Tech2 invention. Now, 15 months later, I want to put my main in a Carrier. It is going to cost around 2.5 B to get the skills, ship and insurance, but I think it will be fun.

Our Alliance is currently trying to claim space in nullsec, so I feel that having a Carrier will be an important support piece. We currently have sovereignty in 5 systems around The Initiative. (INIT.) and Atlas Alliance (ATLAS) territories in the Immensea region. No POS bashing has occured yet, most likely due to the upcoming sovereignty changes (CCP Abathur); I doubt any major Alliances are going to make power-plays until we know the full scope of the new mechanics. 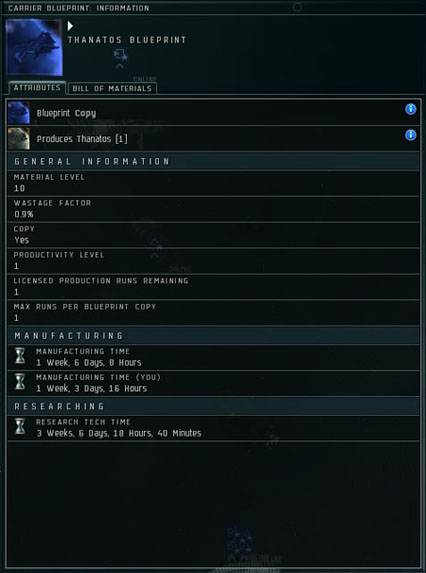 Now, on to see if my corp/Alliance has any BPCs of the Capital parts so I can build the Carrier…

What a lonely home over the past week. I only say one Covert Ops on the Directional Scanner the entire time we were in the system. Currently the WH has stopped spawning new sites, so it is time to move.

We focused on the Rarified Core Deposit for around 4 days and generated around 1.491 B worth of profit after the minerals were hauled to Jita.  We are donating 300M to our corporation and splitting 1.19 B so my personal take home is around 595M.

We did not touch:

All of our minerals were processed by our Intensive Refining Array which has a refining yield of 75%.  In a few months, we are planning on using a Rorqual to compress all of our Ore and bringing it to empire to refine where we can get a much higher yield.

AT7 Day 1 – Laconian Syndicate Vs Kenzoku

Here is an entertaining Alliance Tournament video where both sides cannot follow directions. Kenzoku moved before the match started and took 50% damage to three ships while Laconian Syndicate failed to count their points correctly and had to drop a ship. Good Caldari match where Kenzoku won by a narrow margin.

Thinking in Powers of 10

When I first started Eve, I thought in terms of thousands; skill books that cost 32,000 or 100,000 were high priced and the thought of spending multiple millions on the advanced learning skills was just not justifiable.

After a few months of getting my learning skills maxed out, I found Evemon and saw how beneficial the advanced learning skills were to my character. I mined for hours in my Navitas frigate and hauled with an Iteron III to get enough ISK to purchase the skills. After those skills were purchased, I started to think of items in Eve in terms of millions. Tech I items that cost 100,000 ISK or 200,000 ISK cost next to nothing and I had some 50 million in my wallet.

Joining a corporation set me on a mission to pilot the mightly Hulk, which at the time cost around 80-85 million ISK. I slaved, earning money by trading basic Tech I items like Warp Core Stabilizers and Heavy Neutron Blasters. The Hulk was fun to mine in and made easy work of Veldspar asteroids. After the release of Apocrypha, a corpmate of mine and I moved into a C2, then a C3 and now we are calling a C5’s home; my Hulk is eating Arkonor and Bistot asteroids for breakfast.

15 months after starting Eve, I am setting a goal to pilot a Carrier for the Alliance. The skill books, ship, modules, and insurance all add up to around 2-2.5 B with a 80 day plan to be able to pilot the Carrier with proper module/jumpdrive skills. I have perused the killboards and see the multi-billion ISK damage of a Carrier kill.