One of Eve’s tenets is that anything created can also destroyed. With the passage of enough time, anything will eventually crumble as the universe is slowly heading towards a state of ever increasing entropy.

Players in Eve can be an agent of this entropy. Given enough time you can gain trust within your corporation, perhaps even eventually becoming an identifiable leader figure. If you choose to become involved at a higher level, you could propel yourself into alliance politics. Over time you could leverage your alliance clout to move into a leadership role and thus gain valuable privileges at the alliance level. Access to information, privileges to disband, and access to assets and money could all be yours.

Perhaps you will use that type power to hone the military might of your alliance into a campaign of territory conquest, or perhaps your goal is to engage in a take-the-money-and-run scam.

We’ve seen both scenarios play out and as shown in the Causality video, major events can be enacted by just one person. Large, influential alliance have formed out of nothing — TEST, while major contenders have declined and reformed again and again — BoB to KenZoku to IT to Raiden.

Things ebb; Delve Dysprosium and Northern Technetium fortresses have fallen and changed hands. When I started playing Eve in 2008 people were using plate sniper Megathrons to wage war in nullsec and BoB was king; nothing could topple them. If you follow Eve politics, take a second to reflect on what has changed.

Visualizing the change of power can be done through the membership growth and decline rates of major alliances.

In order to graph alliance changes, I needed access to a lot of historical data regarding member counts. The alliance API only returns the current statistics so I reached out to a high profile member of the Eve community for assistance.

A special thanks to Wollari at Dotlan for providing me with the historical data for analysis. This post would not be possible without his data, which he so generously reproduced a few times after corrections to my source query were needed.

Grown and decline of the Northern Coalition next to the rapid growth of the Drone Russian Federation over the past year. 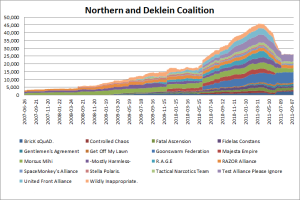 Combined numbers for the NC and Deklein Coalitions.

On 20010-02-03 GoonSwarm (OHGOD) forgot to pay soverignty bills and lost all of their claimed nullsec space. They have since reformed under Goonswarm Federation (CONDI). Test is still smaller than the current incarnation of the Goons.

The above stacked graph shows the Big 10 (12) alliances over time. It looks as if there were only a few major powers back in 2007. Note that this shows how the current big 10 have changed and does not show who was the big 10 over time.

BoB transitioning into KenZoku seems to be an almost one to one member switchover while the formation of IT Alliance brought in a lot of new member corporations.

The fall of IT Alliance seems to have fractured the group. Corporations that were in IT Alliances are now in Black Star, Cartel, Nulli Tertius, Executive Outcomes, Northern Coalition., AAA, Razor, Cascade Imminent, and the Initiative. Only 33.2% of the members moved into Raiden.

Sev3rance is an interesting entity as they have been moving around a lot. Historically they have been the guardians to one of the entrance routes (KBP7-G) to Providence. Having lost their constellation systems in 2010-03 to Ushra’Khan, they found a home in the NC in Pure Blind and Cloud Ring only to move back to Providence in 2011-07.

Messy stacked graph of all 114 alliances in my data set. It does look like there is definite stagnation in nullsec in 2011.

If you would like to see additional graphs or a separate post on how I transformed the data set, please let me know. I only created a few graphs that I thought would be interesting for the vast majority of the Eve audience. Additionally, my nullsec political knowledge may be lacking and I am open to corrections. Again thanks to Wollari for letting me work with his data.

[TIP] In addition to Empire, Dotlan also tracks statistics for WH systems. You can track historical jumps and kills out of game in the following URL format: http://evemaps.dotlan.net/system/Jxxxxxx. So for example, you can see the history on this little C1.

At this point I decided to start harvesting gas. I fitted a Dominix to take on Sleeper frigates and headed out to activate two Ladar sites.

After a few minutes, a Tengu, Drake, and Scorpion were scramming me. They had apparently already scanned our system down and bookmarked it. When I came online, they came in for the kill.

Now I do check the Dotlan charts for my system when I log on for the day, and I should have been aware that there were multiple jumps over the span of 3-4 hours prior to me logging on, but I ignored all that.

Luckily I was quick with the mouse and got my pod back to the POS. After a few minutes of silence, I saw local blinking.

Hmm, I’m not one for smacktalk so I did not respond and starting onlining guns and POS shield hardeners. I think they were looking for me to respond because they eventually got bored and left our system.

There were 10 hours left on our static WH and I sat cloaked watching numerous Space Patrol Russian Federation ships take a peek into our WH to see if any more targets were active until it eventually closed.