Once again into the blobtastic yonder

My string of BS losses to random disconnections, blackscreens and blackouts has shown no signs of abetting as has my corpmates’ request for me to join them in null, which according to them is full of happiness and liquid isk and shooting people who never ever come to our home systems, honest.

So, once again my corp is somewhere in nullsec and I’m following them in pursuit of fun and profit. For those of you new, let’s recap my null experiences:

#1
Alliance was used as renters before renters existed to inhabit systems in insmother CVA was trying to take from atlas. We were chased out by AAA.

#3 Corp is situated in Cloud Ring on NC side. Nuff said.

So, I leave my trusty orca in jita, pop in a viator and fly my three chars down to null.

Things got off to a flying start when I docked the viator, went five jumps to get a geddon for ratting, came 4j back and got bubbled and podded 67km from the station.

So, as of speaking I have four alts in null, drake pilot, drake/domi pilot, scanner/amarr everything, and Orca/domi pilot. Since I feel bad about not participating in CTAs I’ll be using the drakes because I’m sick of losing effing BSs.

Speaking of CTAs, my quest to get one actual pvp kill gets another good try with this boomtastic battle.

I’m the guy in the drake. Since I’m not an experienced nullsec spinmaster or news caster I’ll just say that having a gang of 450 individually “gf” a 15 man group we just steamrolled was one of the funniest moments I’ve had in Eve thus far. 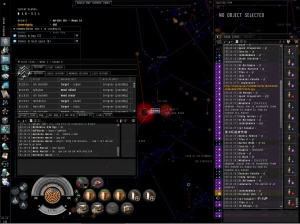 I’m sure I’ll be told to redact that image because A. It’s a horrible drake fit, B. evil people might learn…..

That shooting SBUs in a subcap fleet is boring?

3 Comments on “Once again into the blobtastic yonder”