← meme: statistics (hehehe)
My train of thought is on a roller coaster. →

Scanning, argued as being the only thing in Eve that takes skill, is a fairly integral part of WH life; to the point that if you can’t, and you’re alone, you’re dead. With that in mind, here is my guide to scanning. You’re
welcome.

First, what are you looking for, and are you in a hurry? If you’re looking for the odd site, a grav or radar, scanning is pretty straightforward and can be followed by the original post which was mostly funny but had a few gems of insight.

So, here’s my guide to finding a WH route in a hurry.

The first thing to know is, by design or accident, WHs are not very hard to find, even without basic scan skills. I’ve found radars that had me punching my desk in frustration after the third time of getting stuck at 95%, but never once found myself thinking “dangit, why can’t I pin this WH”.

Assuming you have mediocre or good skills in the scanning subdivision, and a mediocre or excellent scan ship (covops or t3 w/ sister gear), a WH will generally have a scan strength of 10-27% when scanned at about 4 au. So, essentially, setup the probes at 4 au and do a sweep of the system, going from planet to planet. Ignore any effing ladars that pop up at 70% or indeed 100% (happened twice), magnetometric (not likley), or radars (less likley). If you do happen to see an unknown, pin it, warp to it, BM it, weigh your options.

From what I’ve experienced, the easier WHs go to lighter systems (in terms of C1-6), so it stands to reason that the WHs you find on the first pass will either be good WHs, or k162s, which seem to similarly have a higher initial “strength” than other WHs.

I’d say as a blanket statement that if you do run into a k162, and the route’s still new, I’d just close the WH connecting you to the system with the k162 and start over. A k162, again, means that someone else is nearby, may have already activated the static of the system you’re sitting in, giving you less time to do your operations. He may be planning an ambush, or plotting a PoS attack (both unlikely). Admitted, seeing as you found the k162, he may never notice you, but I’ve found that people tend to notice new connections. Especially CCRES, AH, two seperate groups of russians and some germans, all of whom have spilled at us from K162s that we decided to stay connected to.

Here’s the above paragraph, but in more detail and with pictures.

First, bookmark the damn WH you came in from so you don’t end up rescanning the damn thing. Remember, informative is key, in this case where it goes, and whether it’s incoming or outgoing.

Second, launch probes. You might think this comes naturally, but I figured it was important enough to include. Use any number greater than three. I like seven.

After launching probes, get away from the WH. It takes only one smartbombing BS to ruin a cloaky’s day. I like to stay about 30-40km away, close enough to run back in in good speed but far enough away that it is highly unlikely that you’ll be decloaked by random jerks. Try to either keep in constant motion or not be between a celestial and the WH, because a ship warping in sometimes decloaked you when he goes through your ship at several thousand kilometers/second. 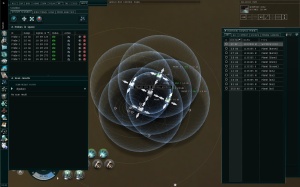 If you’re using four probes, then just do the plus sign. If you use any more than four, leave them in the center. I like to think it helps to have two of them one size smaller than the others, but that’s just me.

Now, pick a planet. A sig will only spawn within eight AU of a planet, but for the initial sweep I like to use 4 AU as a starting point. In my experience, sigs usually hang around or beside rather than above or below planets.

I usually start with middle planets, as there’s usually more sigs where there are more planets. Makes sense, right?
For this demonstration, though, I’m using the outer planet.
So, ready to hit scan? No, you’re not. Make sure the damn scan thingy is positioned correctly vertically.

A ladar and two other things. Now, ladars being the wormhole equivalent of sewer runoff, ignore it and look at the other four.

One of them, ALT whatever, has three signatures and is at about 3% strength. This tells us that it’s too weak to be your usual wormhole. The other sig, tho, is below 25% but fairly close, so let’s center on that.

Scan that and… little red dot. Switch to vertical view:

excellent, reposition the center of your little cross/plus/times sign and rescan, BAM:

It’s a WH, So let’s decrease the size of the probes by one, make the cross shape again, do that a few times:

Scan for the last time, bang it’s a WH. Warp to it @ 20km in case of smartbombing BS, ectera. 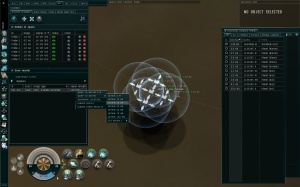 BM it, and ignore it. Ironically, between the previous and next screenshot, two orcas jumped through and closed the WH.

Reset the probes to 4au, check the next planet.

Looks like nothing you can pin on the first pass, so let’s try the next one. 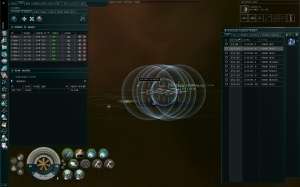 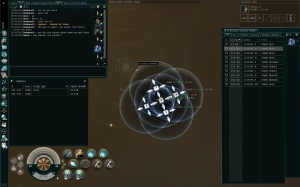 That was the only “close” sig, so let’s check the next planet.

Hmm…the dots have split. I usually go off “If you get 25% strength or more when you add the strengths of the two dots together, go for it”. So, let’s hit YDX. Adjust the probes so that you’re encompassing the two dots in the middle and hit scan.

Wewt, unknown. Pin it, warp to it using the above “make the cross smaller” methods.

Awesome, it’s outgoing. First, check and make sure it’s not about to collapse. If it says “about to collapse” in the info, look at the actual WH. The more erratic and jagged the pulsing, the more likely you are to be screwed if you go through. If the WH is indeed critical, I like to use this simple test:
Can you and your corp finish scanning a route, get everything you need out, get everything you need in and be done in less than four hours?

If no, let the WH close/force collapse. If yes, let the WH close and self collapse, because generally the thing’s only got a hour or two left. Again, if you’ve stared at WHs long enough that you can usethe subtle nuances to determine the exact time it has till collapsing, go nuts, if not, let it shut and use a new/different route.

Now, let’s check if it’s the static. Open staticmapper or your corp’s super secret static database you won’t share with anyone.

In hindsight, this should have also been step one, to check the number of jumps recently along with checking the directional for activity.Click the yellow number next to constellation. 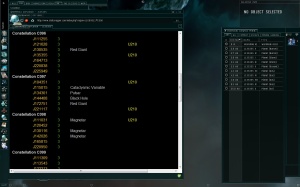 Awesome, looks like you’ve found the static. Record the thing in the database.

Continue scanning for the occasional random connection or just hop through the static. If you’re in a hurry and have several friends, hopping through statics and collapsing the route after the third C6 is generally the best way. If you lack several friends or for some other contrived reason have to use this route, I hope you don’t end up like the poor sod who scanned a 10 link route and still found nothing but the odd nullsec.

P.S. For those of you who wanted a “how to scan someone out without them noticing” guide, why the heck should I tell you? Get a corpmate to float in system in a hulk and pay him 5 mil every time he spots your probes.