These changes have been pushed to the Crius release on July 22nd.

As part of CCP Fozzie’s ship rebalancing efforts, he is removing the ideology of split-weapon systems. Ships like the Typhoon, Phoenix, and Naglfar, which historically had two weapon systems, are being phased out in favor of a single weapon type.

The change for the Phoenix and Naglfar were noted in the Odyssey patches notes as no longer requiring Capital Components which went into construction of the second weapon group.

My interperation of these notes was that the build requirements were being removed. Today however, I found that they have shifted to the primary weapon group.

I did not see the post in S&I detailing the shift of build requirements per Fozzie. 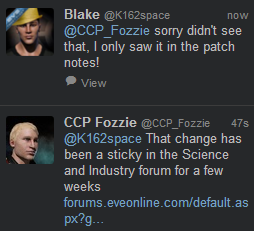 Here’s a screenshot of the Naglfar Blueprint post-Odyssey for verification. As always, adjust your build sheets and database tables. 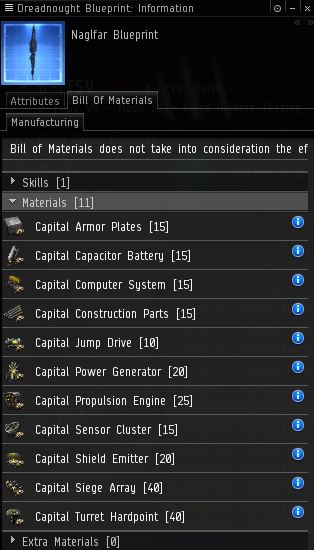 As an early Holiday present to my industry partner Raath, I decided to surprise him and buy two perfect ME Dreadnought BPOs. Each of these Dreadnought BPOs comes with over a year of research and no loss.

I also thought that since we are going to start Dreadnought production, I might as well get a set of guns to go with the additional capital parts needed to build Dreadnought hulls. The additional part and gun BPOs are unresearched, meaning that I will have to get their ME levels up before we start to produce with them. The calculations on the capital guns show a sweet spot of ME 5-7, so I will have to spend under 20 days to get them production ready; the numbers on the new Capital Component prints show that a ME of 4 enables them to be production worthy. 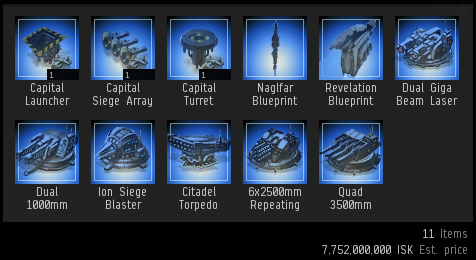 I was not able to find a perfect ME Moros or Phoenix print on the market. I doubt that I will produce the Phoenix class hull as it has poor volume and margins per the research that Eve-Fail has conducted. The Moros as far as I know remains a preferred DPS hull for structure bashing so I will need to locate a nicely researched print soon.