When my trading and production operations are in a refined and focused state, Eve Online becomes Logistics Simulator Online(tm). The singular focus is to take goods from one area and get them to another place where they are worth more due to conflict or different styles of gameplay.

To minimize risk, I do a lot of the freighting and capital jumping on my own. The less people that know about your movements the better. Even with a perfected station-to-station jump technique, I needed more manpower, and hence started to look for a partner.

When I was supplying for the now former TEST capital system of 6VDT-H in Fountain, I ran into a scenario where the amount of m3 I was moving per week could not keep up with demand. I was performing around eight to ten round trips per week which equates to around 2,500,000-3,200,000 m3 of goods, and there was still more work to be done if I had more game time.

I was entering a scenario where I was pushing way beyond the 200 M/hour income rate. At this level, you need to pick your battles carefully and choose where to spend your time. I was now getting to the point where I needed more manpower.

Having worked with the Highsec division of Red Frog many times, I have grown to rely on their service for large moves. They have another division called Black Frog Logistics that deals on moving goods around is the Low and NPC Nullsec.

After performing some due-diligence, the risks were acceptable and I partnered with Black Frog for my operations. After contacting Black Frog (The Black Rook) and seeing if they could make an exception beyond the published 5B/contract mark for me since I was going to be providing them with a lot of business, they agreed to work with me. I assumed higher risk, paid a little more in contract prices, but it got the job done for an acceptable price.

My shipping route was from Placid into Fountain with a quiet lowsec midpoint in Solitude. I needed assistance getting goods from Highsec into the Lowsec station as moving items from Highsec into Lowsec, jumping back to a Lowsec next to a Highsec, using the gate, docking, and jumping out again was the most time consuming operation in my logistics chain.

The Babirmoult Lowsec system has a Gallente station with a nice docking range. After the route and station was picked on paper, I spent a few days scouting the area. I looked at killboards for anything out of the ordinary and I found that there was only the occasional cyno frigate kill. 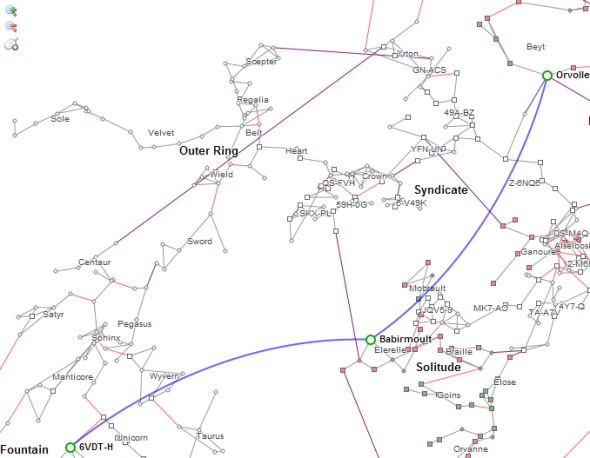 Running an analysis with a set of high volume items, I found that an outlay of 12.982 B would net around 4.127 B of profit even considering the cost of outsourcing to Black Frog. Here is a small sample of some of my worksheets for this outsourcing operation.

My routine at the time consisted of scanning markets, reading up on fleet doctrines, and looking at killboard loss summaries in order to predict future needs. I then contracted out items from Jita and Amarr to Black Frog and often later that day my items were delivered to Babirmoult.

The station-to-station jump (I will make a video on how to do this) between Babirmoult and 6VDT is almost no risk if done properly so my goods arrived in the TEST capital usually within under 24 hours of seeing market potential.

Quick, low-risk logistics. That is the name of the game if you want to compete.