Here we are almost two years later and not much has changed in Nullsec. There are major powerblocks controlling the majority of space and conflicts are over a few precious moon types.

I don’t think the vision of Dominion came to be fully actualized. Some major steps were taken, such as removing the POS bowling that had to occur to gain sovereignty and the addition of upgrades with the Infrastructure Hub, but overall the gameplay hasn’t moved forward as far as the vision promised.

People have been talking about the “Independence from Jita” that Nullsec needs and I haven’t seen a concrete plan to reduce the dependance of goods from Highsec.

Here’s a graphical overview of how I see the current flow of Industry: 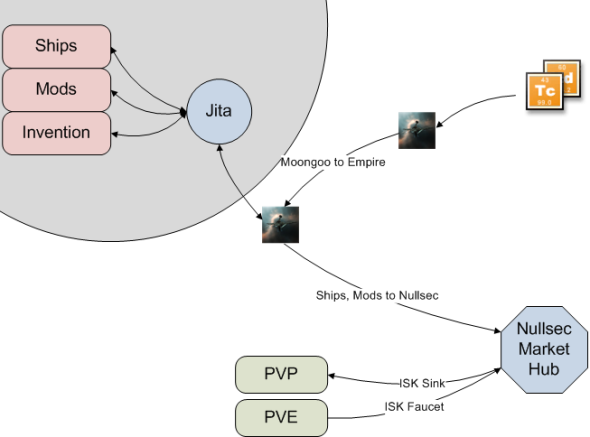 Industrialists are supposed to be producing all of the goods you PVP types want locally with no reliance on anything from empire. This statement could not be farther from the truth.

Let’s use me as a case study. I’m a industrialist that owns many ship, module, and capital blueprints. I have the ability to produce anything from Cap Rechargers, a Heavy Interdictor, or even a Carrier. All of my production occurs in Highsec/Lowsec. I have three characters that work night and day to produce goods that get shipped off to Nullsec.

Why should I move my operation into Nullsec?

Right now there is a low amount of risk for getting my Highsec/Lowsec goods into Nullsec due to proper scouting and intel combined with a high reward because everything in Nullsec is marked up. Why move?!

Yes there is the topic of nerfing Jump Bridges, Cynosural Generator Array, and Jump Freighters but that will do nothing but drive industry out of Nullsec. Making it more difficult to move items around is not the answer. The main problem is the availability of materials and the lack of industrial infrastructure that Nullsec currently provides.

In order for me to make a Tech 2 Drone, I need a few moon materials that come from many regions. There is no way that I could get all of the materials from one Nullsec region. What’s the simplest answer? Eve people always go for the simplest answer — get the items from Jita of course! Why would I spent hours getting wild trade routes setup in Nullsec when I can take a freighter to Jita and buy everything that I need en mass?

There will be a huge amount of player uproar if the current distribution of moons is altered. Instead there should be a new method for obtaining moon materials other than POS moon harvesting. Perhaps we can see scannable comets emerge? Perhaps a Tech 2 moon harvesting Noctis hull?

I can understand moving research (ME/PE/Copy/Invention) slots to a POS structure, but having manufacturing slots so few and hard to come by in Nullsec impedes industrialists from starting operations.

New players that want to get into manufacturing should be able to spend a few days polishing off skills and have access to slots in Outposts. This reduces the barrier of entry and keeps POS permissions and corp politics out of the arena.

Why would I fight with other people in a Outpost for use of the 10 available slots when in empire I can have access to 50+ in one system? When I do a Carrier build, I get all three characters on the job and I have 30 capital parts building at once. Adding a 3x or more time multiplier on my overall job doesn’t encourage me to move my operations to Nullsec.

Players should have access to cheaper, more robust upgrades for Outposts and be able to have multiple Outposts in systems. If you truly want to make a home capital system in the sky, then we should be able to have the ability to construct facilities that rival Empire systems. This is how Dominion could have created some really valuable territory that people would like to own. Imagine how encouraging it would be to solicit to an Industrial corp to join your Alliance if you controlled a system with six outposts dedicated to manufacturing. Imagine how attractive it would be for a foreign power to take that away from you!

The amount of Lowend minerals (Tritanium, Pyerite, Mexallon) is very unbalanced. Making Capital ships requires a huge amount of lowends and the small sized in the belts is not enough to meet the demand. The current method for building a large amount of ships or Capitals is to mine the Highends, compress and ship the off to Jita, buy high compression ratio items/minerals, bring back to your production area and manufacture.

Currently it is too difficult to keep the Industry Index at 4 or 5 compared to the Military Index. Make it easier to maintain and spawn better sites at high levels.

Increasing the amount of HP on a structure rather than going with the time-based model of taking structures will only encouraging more blobbing. Any new method for taking sov or disabling station services should be timer based.

Nullsec logistics is already hard enough if you are far away from Empire. Jump bridges and Cynosural Generators perform well. If any change to Logistics is to be made, increase the consumption of Isotopes or Liquid Oxygen.