Interesting to see moon minerals on one the Odyssey announcement slides at PAX East 2013. I hope that a serious look at industry balancing is going to take place now that the general population seems pacified by the content in the Crucible, Inferno, and Retribution expansions.

The icons shown are for R64 moons, which have concentrations skewed towards galactic quadrants as shown by data analysis. I can only imagine what they have planned as they have stating their intention is to remove passive static resource fountains such as the current moon mining system. 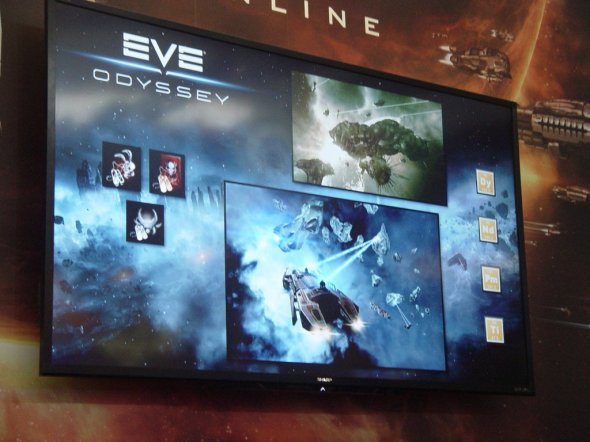 In a previous post, I detailed the concentration of Technetium and Cobalt moon locations because they are of particular political interest due to their distribution and the recent rework of the Alchemy reaction for Platinum Technite.

Now I wanted to use my entire dataset to plot out all moon minerals to see if there was any pattern or promise of future monopolistic cartels due to the geographical distribution of the moon minerals.

My dataset contains information on 32,162 moons with a lack of data for Evaporite Deposits; I don’t consider this alarming to my analysis as it is a very common moon mineral.

Since my master dataset was pieced together from a few independent sources, I am not surprised by the inaccuracies or missing data points. As I have stated before, sanitized moon scanning data is usually a closely guarded piece of information by large Alliances and Industrial corporations as a large amount of time and energy has been spent gathering the data.

The raw numbers show that I have very poor coverage in many regions, but we need to consider that not every moon contains a mineral.  If I knew the density of moon minerals (how many received minerals versus not in the seeding process), I could get a better feeling of my coverage levels. For now just consider the Green regions having a strong coverage and the Red regions showing poor coverage; ignore the coverage percentage values.

Despite the alarming Red portions that indicate major holes in my dataset, we can see interesting visual results from the initial galaxy seeding process. These seeding trends can help us explain the prices of certain minerals given their location, political atmosphere around specific areas, and weight necessity in the Tech2 production chain. *cough* Technetium *cough*.

The low value of these types of minerals is due to the sheer amount and distribution of each type. These common minerals are contained in almost every region. 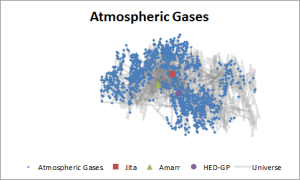 With these types, we can see a definite skew in the regional location of each type. There are major pockets with a small scattering around the universe. 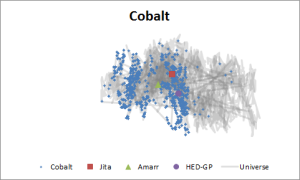 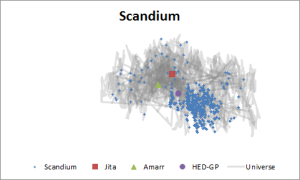 With the Rarity 16 minerals, there seems to be an even spread across the universe with no major points of concentration.

With these moons it seems like each type is dominant in a specific quadrant of the universe. Ceasium in the West, Hafnium in the South, Mercury also in the South, and Technetium having the majority of its concentration located in the North. 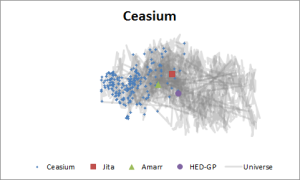 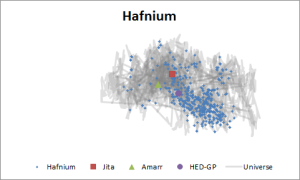 The rarity of these moons is shown with the lack of points on the scatter plot. We can see that they are spread around the Universe, but the lack of quantity keeps each type rare.